“I don’t know how they got me to do half the stuff I did,” Leah Michele admitted.

“But I was in really good shape this summer, so…”

For Agron, the dangerous pix weren’t the three-way shots like the one on the GQ cover, which features a lucky Cory Monteith sandwiched between the two Glee ladies with one hand planted on each luscious booty. 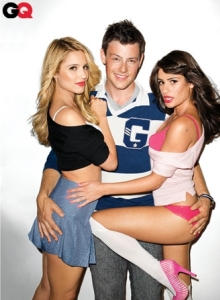 “When it was just Lea and me, I was like ‘We’re in skimpy clothes, we’re up against each other. This is feeding those rumors,'” Agron said. “I’ve never been shot in so little clothing.”

The cover story that goes with the shoot describes the onset vibe at Glee as a “slumber party” but it actually sounds more like an episode of Fame. Castmates have a dueling Michael Jackson sing-off, break into a Teach Me How to Dougie dance session and take joy rides in Artie’s wheelchair.

“This sounds really cliche, but it’s true — it’s the high school experience I always wanted,” Monteith tells GQ. “Where we’re all growing into this new life together and figuring it all out as we go. I remember I’d come home from fifth, sixth grade, and I’d watch Saved by the Bell and be like, ‘I hope my high school experience is like that.’ And it totally wasn’t. It sucked.”

Monteith’s onscreen girlfriend Lea Michele would agree the Glee crew has got something special. “If anything’s going on in our lives, we have each other,” Michele tells GQ. “One time, I was having a bad day, and I called Chris Colfer (Kurt). He came over with a pint of ice cream and Madea Goes to Jail, and it was, like, the best night of my life.” 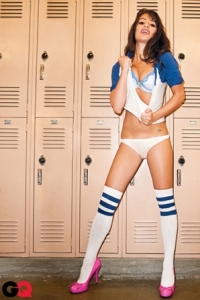 In spite of the sexy shots, however, it turns out there is a “no trailer sex” rule on the Glee set.

“There’s a beautiful chemistry to this show, and messing with that would be dangerous,” says Monteith.

Meanwhile, in the wake of a visit from Britney Spears, Agron reveals who is on her guest star wish list: Christopher Walken!

“I don’t think people are too fond of that suggestion,” she admitted. “I think they just want me to say Justin Timberlake or something.”

For the record, SheKnows would approve of either visit!