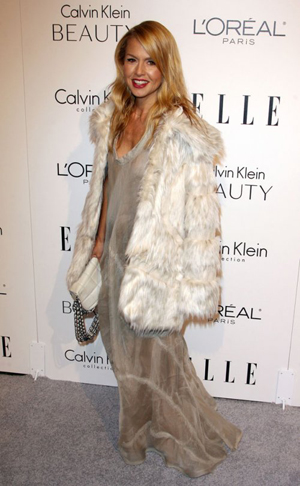 Although Rachel hasn’t officially confirmed the pregnancy, sources say the celebrity stylist is expecting her first child with her husband Rodger Berman.

OK! Magazine was the first to report that Zoe was pregnant, and a source confirmed the news saying it is very “hush-hush” but has been “telling people she can’t travel.”

Her former assistant, Brad Goreski, added fuel to the fire when he said that he and Zoe were still very close. “I hope to be in the delivery room!” he said.

Zoe’s husband of 12 years, Berman, recently even blogged about his desire for children. “Rachel isn’t getting any younger and I’m starting to feel like if we don’t get on it, we’ll miss the opportunity, which would be a complete shame as I know that Rachel would make an amazing mother.”

Zoe, however, has remained tight-lipped about her pregnancy. She deferred any pregnancy questions, preferring to comment only on her dress. “It’s Calvin and I’m comfortable and it’s effortless I’m honored to wear it.”

The petite Zoe would not have much difficulty hiding a baby bump regardless of what she is wearing, but the long flowing gown and jacket would certainly be my choice for hiding a pregnancy.

Tell us: Can you spot a baby bump?

read on for more Rachel Zoe