Glee is getting spooky with its Halloween episode dedicated to The Rocky Horror Picture Show. Check out the world premiere video of the Glee cast doing the Time Warp. 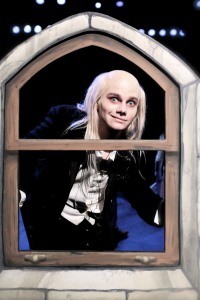 Be prepared to be taken into a time warp, Gleeks!

The Glee episode that we’ve been waiting for is a mere week away and just in time for Halloween. The Rocky Horror Picture Show-themed episode is set to creep onto the small screen next week and the search engines are buzzing with anticipation.

The Glee cast is taking on the iconic cult classic that is also celebrating its 35th anniversary this year. Can’t wait to see who your favorite cast members are going to be transforming into? You don’t have to.

Rachel (Lea Michele) is going to morph into the popular character of Janet, while Mercedes (Amber Riley) will lace up her corset to play Tim Curry’s famed character of Frank-N-Furter. Chris Colfer’s character Kurt Hummel will be creep-tastic as Riff Raff.

“Riff Raff is the best character and everyone was amazed at how incredible the makeup was,” Colfer told TV Guide. “I was mistaken for a blonde woman a couple times. All I kept thinking was, ‘You did this to yourself, Chris.'”

Finn (Cory Monteith) is going to go nerd for the night and play Brad while Sam’s (Chord Overstreet) going to take on the role of Rocky Horror.

Check out the world premiere of Glee doing the Time Warp and grab the album in stores and online now!

Glee does The Time Warp