It was TV theme week on Dancing With the Stars and the judges weighed in, giving their analysis of each star’s progression up to this point. Unfortunately, it was not all fun and games for Bristol Palin or Kyle Massey as bold moves landed them at the bottom of the leader board. 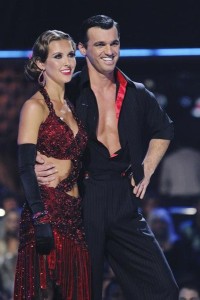 Dancing With the Stars hit the half-way mark in the competition Monday night, and it was time for the judges to critique the remaining stars’ dances from the first half of the season and pick each of the couple’s best dances. Of course, the mid-semester grades were nothing more than an opportunity for Len Goodman to say they should point their toes or give more passion to the performance. What really matters is how they fared on the floor that evening. The rest was in the past as the contestants moved forward in the race for the mirror ball trophy.

Only a slim margin separates our two leaders this week. Let’s see how they stacked up.

Last week, Jennifer Grey produced the first tens of the season with her awe-inspiring waltz with partner Derek Hough, but another couple was hot on their heels this week. This week, with TV theme week looming over the contestants, Brandy and Maksim Chmerkovskiy kicked off the night and landed a personal best score with a quick step to the Friends theme song. They started off a bit chaotic but brought it home with fast footwork that was also very clean. Len Goodman praised it as their “best dance.”

Grey and Hough danced a fox trot to Married with Children and it was definitely not a perfect marriage of technique and art. The judges thought it was good but some moments were lacking in focus. Len Goodman also labeled it “too theatrical.” Perhaps the couple’s quarrel behind the scenes carried over to the performance. Despite the hiccups in the routine they still managed to separate themselves from Brandy and Maks by two points.

Check out how the rest of the couples tackled TV theme week.

Ironically, Florence Henderson’s Brady Bunch-themed tango with Corky Ballas was not a complete winner with all the judges. Bruno Tonioli thought she was a bit jerky but Carrie Ann Inaba loved it. I personally thought it was too soft and not hard enough around the edges. I’m not sure what Len Goodman was drinking, I mean thinking, when he said it was “her best dance so far.” Was he not watching her raunchy rumba last week?

Kurt Warner and Anna Trebunskaya didn’t dance the best technical rumba last week but this time around they fared better with their Bewitched-inspired quick step that wasn’t so quick in my opinion. They were a bit slow but moved around the stage in a way that made it look easy. I’m not a judge, however, so this is what the real ones thought. Carrie Ann Inaba actually thought “the spirit of Gene Kelly” took over Kurt Warner’s body. Bruno Tonioli thought the “magic was back.”

Audrina Patridge and Tony Dovolani danced to what else? The theme from The Hills, Unwritten. The couple tried to give Len Goodman passion with their rumba and they certainly released their inhibitions as the song suggests but not enough. The dance had good hip action but she was still not exuding the sensuality the judges wanted.

Kyle Massey and Lacey Schwimmer get my vote for most creative couple. They’re just so interesting every time they step on the floor. I don’t care if he does lack technique. Unfortunately, creative only gets you so far if you’re Bruno Tonioli and Len Goodman. If you’re Carrie Ann Inaba, Kyle Massey was on fire. His fox trot to the Charlie’s Angels soundtrack was either too disco-infused or spot on. His scores were all over the board.

Rick Fox and Cheryl Burke are a hot couple so the rumba was perfect for them this week. The judges thought they brought the heat and for a big guy they thought he was great musically. Bruno said, and I quote, “You went from Megatron to Mega-smooth.”

Bristol Palin and Mark Ballas invaded the dance floor dressed in monkey suits. No, not tuxedos, actual monkey costumes. Yes, they danced to the theme from The Monkeys. Their jive gave Bristol Palin the perfect chance to show her personality but the costume got in her way technique-wise. She did take a big step in coming out of her shell. Unfortunately, it was just a mess.

Check out the results show of Dancing With the Stars Tuesday night with special guest Jason Derulo.