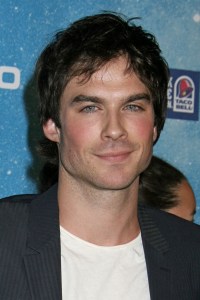 No surprise, the True Blood clan nabbed quite a few of the Scream Awards, including Best TV Show, Holy **it moment and Horror Actor and Actress, with Anna Paquin, Alexander Skarsgard, Stephen Moyer, Sam Trammell and creator Alan Ball on-hand to accept.

In other not-so-surprising news, The Twilight Saga: Eclipse racked up the Fantasy awards, including Best Fantasy Movie and Best Fantasy Actress and Actor for Kristen Stewart and Robert Pattinson. There were also Scream shout-outs for Taylor Lautner and Xavier Samuel.

Vampires ruled the night, and while The Vampire Diaries hotties Nina Dobrev, Paul Wesley and Ian Somerhalder didn’t nab awards, they did take the stage as presenters. They got a much better reception than the somewhat offensive and misogynistic Marilyn Manson.

The night’s big heroine was Sigourney Weaver, who emerged from a giant brain-shaped pod to be dubbed by James Cameron as the “Queen of Sci-Fi.” Mickey Rourke got the Best Villain award from hottie Megan Fox. 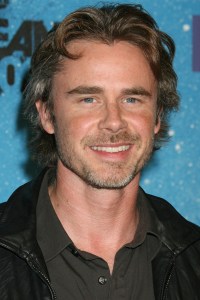 Green Lantern earned the title of Most Anticipated flick, with Ryan Reynolds accepting the nod from Blake Lively, and the Scream Awards also had a few good sneak peeks of other upcoming films.

Wes Craven, Neve Campbell, Emma Roberts and David Arquette presented a glimpse of Scream 4; Sir Anthony Hopkins offered a peek at The Rite; and there was also a peek at the highly anticipated Harry Potter 7.

There was also a preview of AMC’s post-apocalyptic series, The Walking Dead, which is based on the Best Comic Book or Graphic Novel winner of the same name.

In reunion news, Michael J. Fox, Christopher Lloyd and their infamous time-traveling DeLorean took the stage together to celebrate the 25th anniversary of Back to the Future.

Bill Murray showed up in his old Ghostbusters uniform, respite with proton pack, and earned a standing ovation as he accepted the Best Horror Movie award for Zombieland.

To see the big moments and check out the gargoyle and ghouls onstage and off, tune in to watch 90-minutes of the Scream Awards Tuesday at 9 p.m. on Spike.