We can’t keep up with all of this back and forth with celebrity couples breaking up and making up! Next on the docket of “are they or aren’t they” is Kat Von D and Jesse James. 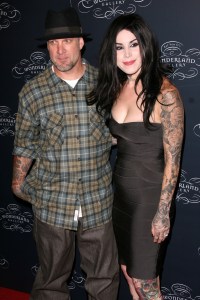 First Kat Von D and Jesse James were “just friends,” then, according to Twitter, they were a couple, next they were reportedly moving in together and now they’re over? Jeez. Can we get a flow chart on this one?

On Thursday, it was reported that Jesse James, Sandra Bullock’s ex-husband and general scourge on society, was said to be moving out of Austin, Texas to be closer to his new lady, LA Ink star and Michelle “Bombshell” McGee doppelganger, Kat Von D.

The irony is, James supposedly moved to Austin to try to win Sandra back. One word: Fail.

But the very next day, reports hit that Jesse and Kat were on the rocks and ending their relationship, which went public back in mid-August, though multiple sources claim the pair were together for some time before Kat tweeted a confirmation to the rumors they were an item.

According to various reports, Kat Von D was seen hanging out with her ex, Nikki Sixx, in the VIP section of the House of Blues on October 5 and was flirting with another married ex, Jackass star Bam Margera, over dinner at The Redbury a few days earlier (Sidenote: We went to dinner there last week also and the food is awesome. Maybe they were just cooing about the deliciousness — or maybe not).

While some say the relationship is failing because of the distance between Jesse (holed up in Texas) and Kat (who lives in LA), others believe jealousy is to blame and say Kat is getting catty and suspicious about Jesse hanging out with other women.

Now why on earth would she feel the need to worry about something like that?