Lance Armstrong and his girlfriend welcomed a healthy baby girl into the world!

Lance Armstrong announced the news of his fifth child via Twitter. “Olivia Marie Armstrong has arrived!” 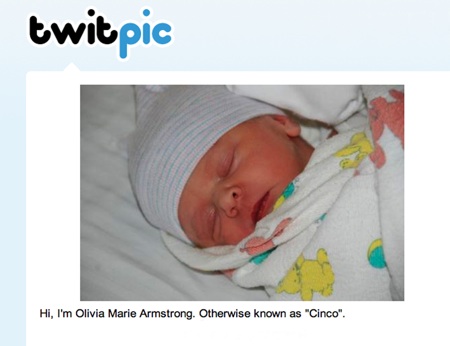 “Thanks to you all for the support and well wishes. Momma and Olivia (@Cincoarmstrong!) are doing great. She’s a beauty!”

It does not appear that Lance and Anna had to go through the same heroic measures that he and Kristin did to have their kids. While Kiki went through extensive and sometimes painful fertility treatments due to Lance’s history with cancer, his Ball of Steel seems to have made a powerful comeback — he and Anna conceived naturally, by all accounts.

read on for more lance armstrong