Tyra Banks has been sued by the mother of a teenage sex addict who appeared on The Tyra Banks Show. 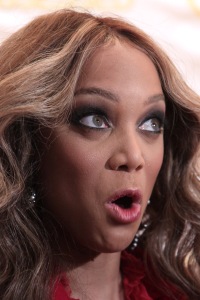 The mother of a young sex-addicted teen is reportedly suing Tyra Banks for a cool $3 million.

Beverly McClendon is furious that her daughter, who is a minor, appeared as a guest on Banks’ former talk show, The Tyra Banks Show, without her consent.

How did the 15-year-old girl make her way to the supermodel’s stage to talk about sex? It’s quite simple, actually. She reportedly sent in her information for an online casting call looking for teen sex addicts. Banks’ producers put the girl from Georgia on a plane and brought her to New York — all expenses paid — the lawsuit is claiming.

The lawsuit, which was allegedly filed in federal court Oct. 8, says that the episode of The Tyra Banks Show that Beverly McClendon’s daughter appeared on “was undoubtedly watched by sexual deviants, perverts and pedophiles alike,” and was a direct violation of her teen daughter’s right to privacy. Really? I don’t think she would have gone on Banks’ show if she was worried about privacy.

Beverly McClendon is also trying to stop future airings of the show featuring her daughter.

The Tyra Banks Show, or Tyra Show, ended its fifth season run on May 28, 2010, but can still be caught in reruns where available.

Banks is a pretty sharp business woman. I’m sure she’ll be just fine. Tell SheKnows what you think of the lawsuit against Tyra Banks.