Barbara Billingsley passed away at the age of 94 and left a legacy to be passed on for generations to come. Billingsley was best known as June Cleaver on the 1950s television smash, Leave it to Beaver. 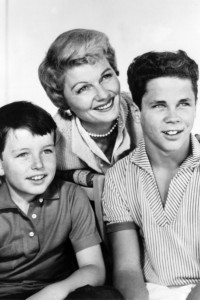 The 94-year-old actress whose name became synonymous with being the typical American housewife of the 1950s, died Saturday after a courageous and lengthy battle with an undisclosed illness, family spokeswoman Judy Twersky revealed.

Barbara Billingsley had such an affection for playing June Cleaver on the hit Leave it to Beaver.

“We knew we were making a good show, because it was so well written,” Billingsley said. “But we had no idea what was ahead. People still talk about it and write letters, telling how much they watch it today with their children and grandchildren.”

The show that made Barbara Billingsley a household name debuted in 1957. Leave it to Beaver featured 9-year-old Jerry Mathers as the comical Beaver opposite Billingsley’s June Cleaver, the perfect stay-at-home mom.

Billingsley’s perfect portrayal of June Cleaver is art mirroring life according to her own two sons. “She was every bit as nurturing, classy, and lovely as June Cleaver, and we were so proud to share her with the world,” son Glenn Billingsley said after her death.

Barbara happened to disagree with her son’s view on her image, but did say she might have grown more like June Cleaver over time. “I think what happens is that the writers start writing about you as well as the character they created,” she said. “So you become sort of all mixed up, I think.”

The character Barbara Billingsley played might have had a tarnish-free life, but in real life, things were not always easy for Billingsley. She was born in Los Angeles on December 22, 1915 and was raised by her single mother after her parents divorced.

She married Glenn Billingsley but divorced him when her sons were young. Billingsley married her second husband, director Roy Kellino, but he died of a heart attack just three years into the marriage. She scored the role of June Cleaver months after.

In 1959, she married a doctor, Bill Mortenson, and they were married up until his death in 1981. The family spokesperson said survivors include her sons, a stepson and grandchildren.