Rapper T.I. is sentenced to 11 months in prison for violating his parole. Did the judge make the right decision?

Hero one day, prisoner the next. Just another week in the life of T.I. 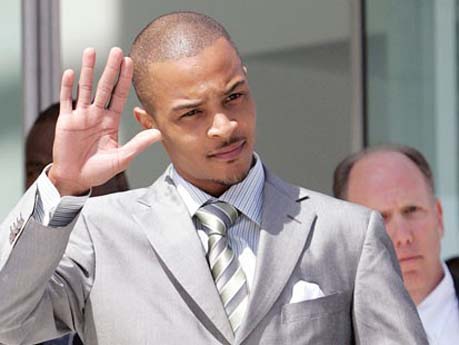 The rapper, born Clifford Harris, was sentenced to 11 months in prison on Oct. 15 for violating the terms of his parole. T.I and his wife Tameka “Tiny” Cottle were arrested in Los Angeles on Sept. 1 for possession of a controlled substance. Marijuana was found in the car along with ecstacy and, allegedly, the codeine-based drink Sizzurp.

“The Limit of Second Chances”

T.I. served a year in prison in 2009 on federal weapons charges. He faced 30 years, but managed to get the sentence reduced by pleading guilty and submitting to community service.

“I screwed up. I screwed up big time and I am sorry. I don’t want and I don’t need to use drugs anymore. I want them out of my life.” the singer told U.S. District Judge Charles Pannell, who also ordered him to serve a year of supervised release.

Judge Pannell was unimpressed by his apology, saying the rapper has “had about the limit of second chances,” according to the Atlanta Journal-Constitution.

T.I.’s community service prior to his year-long stint in jail included talks to young people about the dangers of gang and drugs, along with an MTV show Road to Redemption. He was widely praised for the work and pledged to stay off drugs, something he wasn’t able to do after his release.

“We hoped he would demonstrate he’d turned his life around and serve as an excellent role model — that he was someone who was living what he was preaching,” U.S. Attorney Sally Yates said.

Instead, Yates said the Atlanta-based rapped submitted two diluted drug tests in the weeks before his arrest. He also tested positive for opiates after the September arrest.

Judge Not Impressed by Good Deed

T.I. made news earlier this week when he helped talk a suicidal man down from a downtown Atlanta building. Atlanta police officer James Polite spoke on his behalf at the hearing, telling the judge that T.I. “very instrumental” in saving the man.

Pannell was not impressed.

“This case was an experiment,” he said, referring to the rapper’s prior jail sentence. “Mr. Harris, you sure have dumped a lot of smut all over the experiment.”