That is one of the highest of the year. Now, with the film arriving on home video October 15, audiences can take another look, or perhaps a first gaze, at the family film that has pleased much more than families! How to Train Your Dragon stars Jay Baruchel as a young man born into a family of dragon fighters who is more fit for making campfires than fighting fire-breathing dragons. 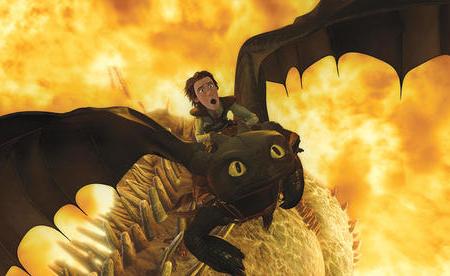 His father, played by Craig Ferguson, is the village’s most lauded dragon slayer and to say he’s a little disappointed in his less-than-able son is an understatement.

We are proud to present an exclusive clip from How to Train Your Dragon starring America Ferrera, who plays a tough girl contemporary of Baruchel’s character who has an uncanny ability to slay dragons. Our clip spotlights Ferrera and her ability to capture the character that is unlike any she’s ever portrayed.

In How to Train Your Dragon, Baruchel comes across a dragon pup that is injured and slowly nurtures the beast back to health. In the process, the two become fast friends and the movie is off and running. How does Baruchel tell his father that not only will he not kill dragons, but now he has a dragon as a best friend?

How to Train Your Dragon is a marvelous, touching, often funny and endearing film. If you missed it on the big screen, now’s your chance to witness the majesty of DreamWorks Animation’s latest and greatest offering.

How to Train Your Dragon exclusive clip