If we were to say Robert Van Winkle flips houses on the DIY network it wouldn’t sound that interesting, right? Probably because you don’t immediately recognize the name. Well, close your eyes and replace Robert Van Winkle with Vanilla Ice.

Vanilla Ice, aka Robert Van Winkle, was spitting rhymes in the 90s, but that’s all behind him. “Ice is back with a brand new invention” with The Vanilla Ice Project on the DIY network. 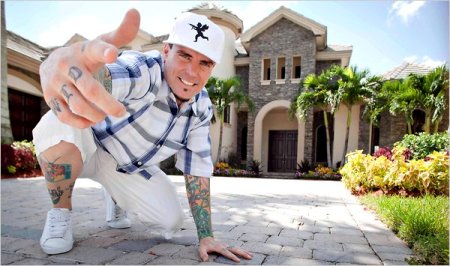 The former rapper has been a general contractor, builder and house flipper for the past ten years in South Florida and we got to see him get his hands dirty on the debut episode October 14.

The performer, who is also obviously local, left his 14-bedroom bachelor pad on Star Island behind and has been married to wife Laura Giarritta since 1998. The couple has two kids. That doesn’t mean the rapper isn’t still deep down inside. His new album WTF is available on preorder.

He added, “We do wild things and enjoy ourselves, but this is not like Pimp This House. We didn’t do crazy purple and green rooms. It’s classy earth tones. We had resale in mind.”

Vanilla Ice is also going green for flipping sake. “It’s real energy efficient,” he said. “The whole place has LED lights — we got rid of the old gas guzzlers. We built an awesome movie theater in the attic with fiber-optic lights and shooting stars and remote control electric screens.”