Barbara Walters flips the script on the queen of talk, Oprah Winfrey, this December during a tell-all interview about Winfrey’s past and future. 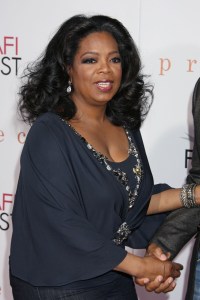 The special hosted by Barbara Walters, A Barbara Walters Special: Oprah the Next Chapter will air on Thursday, December 9. Winfrey is slated to discuss not only her new network OWN, but moments in her personal and professional life over the last 25 years.

Barbara Walters has known Oprah Winfrey since the early days of her career so it’s only fitting she do the honors of also debuting a preview of OWN, which launches on New Year’s Day.

A Barbara Walters Special: Oprah the Next Chapter will be followed by the staple special The 10 Most Fascinating People of 2010 at 10 pm.

Oprah Winfrey launched her farewell season of The Oprah Winfrey Show on September 13, 2010 with a promise of giving back and celebrity surprises. It started with a bang on the debut episode. She treated the entire audience to a trip to Australia with John Travolta as their surprise pilot!

Will you follow Oprah to OWN? We want to know.

Read on for more Oprah Winfrey