Conviction is the perfect title for the Hilary Swank-starring, true life story. Conviction‘s moniker reflects not only the wrongful murder conviction that fell upon Swank’s on-screen brother but also captures the will of a sister unwilling to accept his wrongful incarceration.

In Conviction, Swank displays her usual unique level of acting brilliance. Betty Anne Waters, as inhabited by Swank, is the picture of pure family-driven determination. Swank’s on-screen brother has been convicted of murder and his appeals have all been unsuccessful. Their court-ordered attorneys had done their best, but Kenny Waters was looking at life in prison with no possibility of parole. Swearing his innocence throughout, the man who leaves a baby daughter behind to go to prison motivates his sister to not only get her bachelor’s degree, but also a law degree in order to free him. 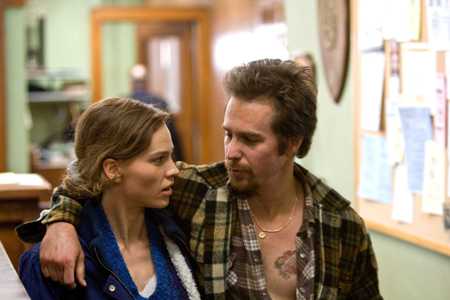 As told by director Tony Goldwyn, Conviction jumps across time periods, from when Betty Anne and Kenny were mere children to after Betty Anne’s wedding party which sets the stage for those who will paint Kenny as one that is quick to un-cork violence. Then, the heart of Conviction — the effort to overturn the murder conviction — gives the movie its emotional juice. Collectively, the story is intensely compelling and will affect you long after the credits roll. 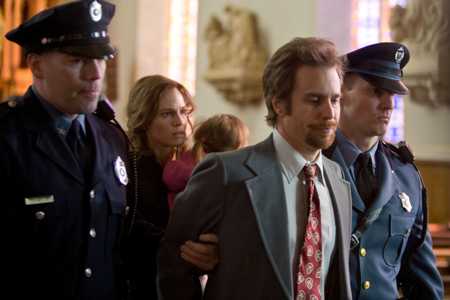 Not to be outdone in the acting accolades, Sam Rockwell shines in his portrayal of Kenny Waters. At the same time tenacious and tender, Rockwell too is a force of acting nature in Conviction. Through Rockwell’s eyes, audiences are privy to a characterization that Betty Anne herself told us was “unbelievable” in its portrayal of her brother.

Central to the story of Conviction is a new science that was unavailable when Kenny was convicted of murder in 1983 — DNA testing. Betty Anne hears about the successful use of DNA while studying at law school. It is then that Swank’s Meryl Streep-like ability to capture characters pressed to the brink and bring them back fighting stronger and more efficiently than ever is on full display in Conviction.

As the leader of the pack, Conviction director Tony Goldwyn takes his innate acting talents and allows his actors to bathe in the glory of this uniquely American story of tragedy and triumph. Goldwyn famously appeared in Ghost and was one of the spokes in that wheel which spun that powerful cinematic experience into film eternity. His hands as a director are equally as magical. 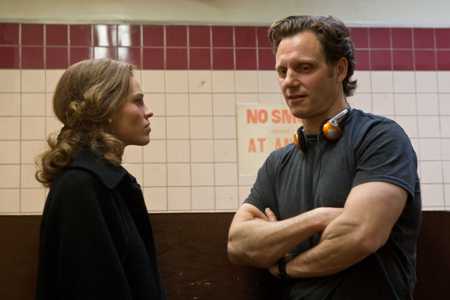 Conviction could be a tough story to tell. Goldwyn manages to weave quite a bit of history together in a yarn that speaks to all of our most soul affirming elements — inspiration, familial love and an unyielding belief in what’s right, regardless of the length it takes to achieve.

From its opening moments, Conviction captures. Swank also serves as a producer and her passion for the persons behind the story are reflected in the film. After anchoring the slightly disappointing Amelia, Swank scores a sensational performance with a sensational movie.