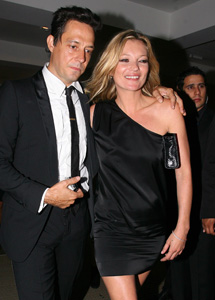 Hard-partying supermodel Kate Moss has finally been tamed — a source has revealed the mannequin tied the knot with The Kills guitarist Jamie Hince.

The secret nuptials are said to have taken place August 7 in Sicily with only their closest friends and Moss’ daughter Lila Grace in attendance.

“It was quiet — but still very romantic,” a source told The Mirror about the wedding, featuring Moss in a see-through dress.

“The plans were kept very quiet as Kate wanted the day to be low-key and purely a celebration of their love. She’s never been one for convention or tradition, but Jamie’s been there for her through thick and thin, and she simply felt the time was right. They planned the day for weeks and were so excited. Kate didn’t want a stuffy, formal do, but something spiritual. Minutes after tying the knot, the giggling newlyweds were outside the church, dancing under trees.”