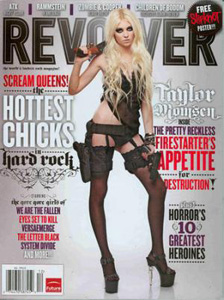 Taylor Momsen and Miley Cyrus are both 17 years old, both are stars — Momsen can be seen every week on Gossip Girl and fronts the rock band The Pretty Reckless — and both are raising eyebrows for their inappropriate sexual antics.

“If it’s a good sex tape, I’ll watch it. I like some adult stars,” she told the mag. “I have a couple favorites. But I will say this: That Tommy Lee-Pamela Anderson video wasn’t very good. I wouldn’t [expletive] Tommy Lee.”

The interview, which had devolved into a pedophile’s sick daydream, took a sudden left turn with a hilarious revelation: Momsen penned Heidi Montag’s single Blackout when she was eight years old.

“I wrote a pop song and recorded it with a producer as a demo. Heidi Montag from The Hills just recently sang it and put it out as her single. I’m like, OK, dude, you’re singing an eight-year-old’s words, but that’s cool,” she said. “It’s so funny because I didn’t shop it or anything and I get this call going, ‘Did you write a song for Heidi Montag?’ and I’m like ‘What?'”

read on for more taylor momsen