Vince Vaughn is speaking out for the first time after a promo clip for his film, The Dilemma, was put under scrutiny for using the word gay in a negative light.

The original version of the trailer, which was revamped, for The Dilemma showed Vince Vaughn saying, “Ladies and gentlemen, electric cars are gay.” 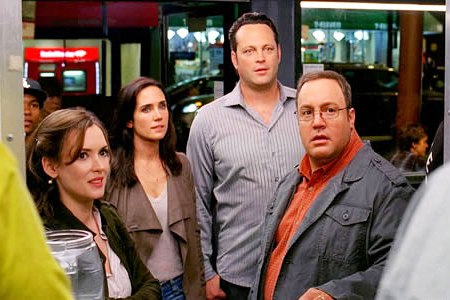 With the nation treading on sensitive water due to the recent rise in suicide rates due to bullying, an angered Anderson Cooper spoke up about the film’s trailer stating he “was shocked not only that they put it in the movie, but that they put that in the preview.”

Vince Vaughn is lending his support to stopping bullying but also wants to make something clear.

“Let me add my voice of support to the people outraged by the bullying and persecution of people for their differences, whatever those differences may be,” the actor said in a statement to Deadline on Thursday. “Comedy and joking about our differences breaks tension and brings us together.”

Universal Studios hasn’t made an official announcement if it will yank the joke from The Dilemma when it arrives in theaters January 14, 2011.

Vaughn is hoping The Dilemma will stay intact.

“Drawing dividing lines over what we can and cannot joke about does exactly that; it divides us,” he said. “Most importantly, where does it stop.”

When SheKnows first ran the story of The Dilemma’s use of the word gay in the trailer, we knew Vince Vaughn, being the class act that he is, would eventually have his say. The dividing lines are sometimes drawn, but it’s hard to say where they stop, as Vaughn says. One thing is for sure, bullying must be stopped.

Read on for more Vince Vaughn