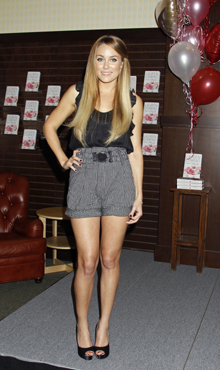 Former Hills star Lauren Conrad will begin filming her new reality show in one week. The new show will follow the 25-year-old getting her new fashion line, Paper Crown, off the ground.

“Right now it’s like music samples and picking lights,” Conrad told Us Magazine. “We start in about a week. I’m excited. It’s smaller this time, which is really great and most of the people I’m working with are most of my favorite people.”
The show will reportedly be shot more like a documentary, focusing more on fashion and less on cat fights.

“It’s going to focus on a clothing line I’m doing with two of my best friends, but it’s also going to show all the other things that I do, as well as the lifestyle,” said Conrad.

Can we expect to see any Hills drama on her new show?

“This [show] is the other side,” Conrad said. “While we were filming, there was so much of our lives that we weren’t allowed to show, and this is basically the rest.”

Tell us: Do you plan on watching Lauren’s new reality show? ???

read on for More Lauren Conrad