Angelina Jolie is a UNHCR Goodwill Ambassador, but that doesn’t mean Jolie is getting any goodwill from Bosnia as she films her first movie as a director. 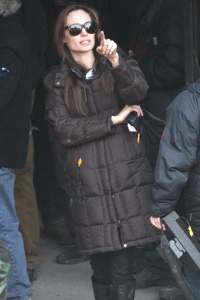 Back in August, we told you that Jolie planned on making her next film, one that would be her directorial debut, in the formerly war-torn nation. She sat down with political leaders, toured filming locations and spoke out about the need to help the Eastern European country rebuild, even though she was also quoted by Reuters as saying the film would be “a love story, not a political statement.”

Regardless of what she intended it to be, the film is now being politicized as Jolie’s filming permit has been revoked by Bosnian officials.

Initial reports claimed the film wouldn’t be allowed to shoot in the country because no screenplay was attached to the application, which is required by law. But now it’s being reported that ministers in the nation revoked the license because they felt the film offered a “misleading history” of a war that raged in the country from 1992 to 1995.

In Bosnia-Herzegovina it was reported that the film was a tale of Stockholm Syndrome that follows a Serbian rapist and his Muslim victim as they fall in love.

“In the film, a victim is really falling in love with her torturer,” Bakira Hasecic, president of the Women Victims of War Association, was quoted as saying in Wednesday’s Oslobodjenje daily newspaper, prompting several female victims from the Bosnian war to speak out against the film.

Jolie, who is currently filming in Hungary with plans to move the production to Bosnia at the end of the month, insists the film is simply about a Serbian man and a Bosnian woman who fall in love in the middle of the war.

Scout Films, the production company behind the movie, has sent a script to Bosnian officials in the hopes of ironing out any misunderstandings and reversing the ministry’s decision.