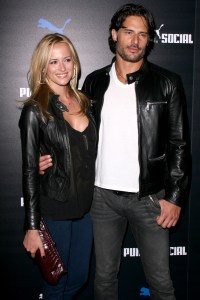 No! We refuse to believe it!

If Manganiello’s name doesn’t ring a bell, perhaps the sight of his bare ass would; Joe Manganiello plays the super tropical werewolf Alcide on True Blood. He’s the one whose nude rump racing after Tara caused us to rewind more times than anyone has since Janet’s wardrobe malfunction at the Super Bowl.

Standing six-foot, four-inches tall, stunningly beautiful and sporting a brick-house body chiseled out of granite thanks to twice-a-day gym visits six days a week, Manganiello is the best thing to happen to television since Alexander Skarsgard and Matthew Fox (Alan Ball and J.J. Abrams totally have the best taste in men).

But now — whimper, sob, tear — Manganiello is off the market, swooped up by a tall, thin, blonde model-actress named Audra Marie whom he’s only been dating since 2009. Ummm, we’ve got food in our fridge that’s been around longer than that. Ready to be even more jealous? Joe asked his practically brand new girlfriend to marry him while they were on a romantic vacation in Italy. Obviously, she said yes. Duh!

The two first met when they were on the way to a Super Bowl party last year. Proving that playing hard to get is the best ploy in the book, according to Manganiello, she refused to go out with him for six months and that was one of the reasons he fell as hard as he did.

Damn it! We knew we should’ve paid more attention to The Rules!

We’d love to offer our congratulations to the happy couple but that would be a flat-out lie. Instead, we’ll say this: Congratulations, Audra. You won the lottery, girlfriend.