Move over Coldplay’s Chris Martin: Your wife Gwyneth Paltrow is taking the music scene by storm and she looks fabulously country! Paltrow’s single Country Strong, from the movie of the same name, dropped this summer and now the music video is out. So, what do you think of it?

In Gwyneth Paltrow’s upcoming movie Country Strong, the actress plays a country star trying to make a comeback after a rehab stint. Fans can get a sneak peek of the big screen action in her new video for the title track, Country Strong. 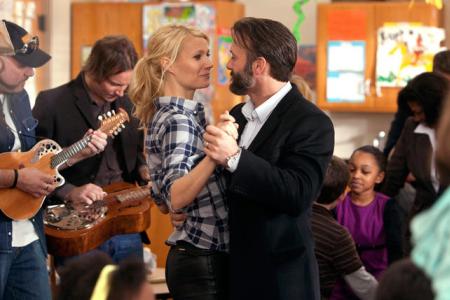 Paltrow certainly looks the part of country crooner in her new video Country Strong which also features her costars.

As you can see from the Country Strong video below, there’s plenty of romantic entanglements and drama in the course of things as Paltrow’s Kelly fights to get back on top and wages her own war with alcoholism.

The last time Paltrow sang on screen was for Duets with Huey Lewis ten years ago and their rendition of Smokey Robinson’s Cruisin spent a week at number one on the Adult Contemporary Singles chart.

Country Strong features yet another Paltrow duet. She performs Me and Tennessee with onscreen hubby Tim McGraw. That track was written by her real life hubby Chris Martin of Coldplay, who reportedly gave the missus some tips on her guitar playing for the film.

With the film due out in limited release December 22, SheKnows has the Country Strong music video for your reviews. This SheKnows editor is no country aficionado, so watch the video and weigh in:

Does Paltrow cut it as a country crooner?