Tina Fey and 30 Rock have their live show October 14 and once upon a time, live TV was the most fly-by-the-seat-of-your-pants entertainment money could buy. 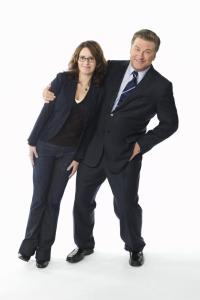 It had all the performance pressure of theater but it was broadcast across the nation to millions of eyeballs, live, without the safety net of editing and do-overs to ensure a smooth, well-produced show.

“Live” — think of the connotations that word carries.

Nowadays, Saturday Night Live is one of the only major non-news or reality based network shows with enough gumption to throw caution to the wind and eschew the luxury of tape delay, at least for their East Coast feed. It’s one thing for Good Morning America, Dancing With the Stars or Big Brother to go live, it’s quite another for a scripted sitcom or drama to kick it old school and take a stab at something largely abandoned decades ago.

And for good reason.

Remember the live episode of ER back in 1997? We almost passed out just from the stress of watching it as we held our breath and wondered, “Can they really pull this off?” They did, beautifully, but it wasn’t easy.

Tonight, 30 Rock goes live, with a rebroadcast of both the East and West Coast episodes immediately following the show, but there’s no need to let the nail biting commence.

Unlike a medical procedural drama like ER, 30 Rock is a show about a show just like SNL. It was created by Tina Fey based on her experiences as head writer on Lorne Michaels’ late night weekend institution after all. Starring Alec Baldwin, arguably the best SNL host in history (Delicious Dish featuring his Schweddy Balls is still one of our favorite sketches ever), Tracy Morgan, an SNL alum with seven seasons of live TV under his belt, and Fey (there are only two words you need to describe that woman: comic genius), tonight’s episode of 30 Rock will be like every other episode of 30 Rock — brilliant. The only real tension will be to see if anyone cracks during one of the scenes and as long as Jimmy Fallon doesn’t have a cameo, we’re probably safe.

Rumor has it that tonight’s live show will be star-studded and will include another appearance by Matt Damon as Liz Lemon’s (Fey) pilot boyfriend.

Read on for more Tina Fey and 30 Rock