VH1 brings its annual Diva show to the USO. Katy Perry, Sugarland, Keri Hilson and Nicki Minaj will be putting on a rocking good time for thousands of men and women in uniform and their families in San Diego. The show will air on December 5. Paramore will also take the action to the Middle East. 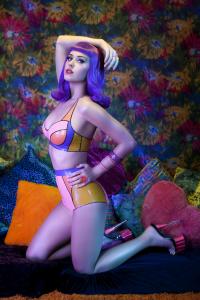 Katy Perry, Sugarland, Keri Hilson and Nicki Minaj will put on a show at the Marine Corps Air Station (MCAS) Miramar in San Diego and then Paramore will take the show on the road to play for Marines, soldiers, airmen, sailors, coastguardsmen and reservists stationed at an undisclosed military base in the Middle East.

“The USO is thrilled to be partnering with VH1 and honored to be a part of delivering such an uplifting event to our nation’s troops,” said USO President Sloan Gibson. “The holidays are especially tough for our men and women in uniform and their families, and having the opportunity to touch so many troops stationed around the world at a time of year that matters most lets them know that America still cares about their welfare. There is no better time to celebrate our armed forces and support their efforts than now.”

The USO has been boosting the morale of our troops since 1941 and Hollywood has always been a part of the action, with the likes of Bob Hope and Kid Rock heading overseas to entertain.

The Divas USO show promises to be a fun, irreverent female-fronted superstar spectacle and will also include a “few good men.”

VH1 Divas: Salute The Troops will air on VH1 Sunday, December 5 at 9 p.m. and will also be broadcast internationally for men and women and their families stationed outside the U.S., courtesy of the Armed Forces Network.

In the coming weeks, you can get updates on who is joining the show at Divas.VH1.com and USO.org.