Rapper TI is due in court for a scheduled parole hearing Friday, but he took some time to talk a man off a ledge in Atlanta. 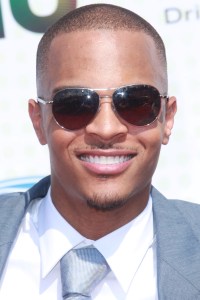 A suicidal man threatening to end his life by jumping off of a 22-story Atlanta building got a new lease on life thanks to rapper TI.

The 30-year-old music star was listening to the radio when he heard about the jumper. TI has been known for reaching out to troubled folks a time or two, so he drove to the site, which also happens to be the building of Atlanta’s radio station V-103.

The man, whose name has not been released, came down with only one condition — one-on-one time with TI.

The rapper told the Associated Press he seemed “beat up by life.”

TI added, “I told him it ain’t that bad. It’ll get better, to put the time and effort into making it better. I just reminded him, it looks bad right now, but it can turn around.”

The troubled musician knows all about turning things around after serving a year in prison on federal weapons charges.

The man was allegedly taken to a local hospital for psychological evaluation.

As for TI, his good deed won’t keep him from his court appearance Friday. The star will attend a parole hearing after being arrested on suspicion of drug offenses last month.