Wednesday’s episode of South Park poked fun at the exploding popularity of New Jersey-based reality shows The Real Housewives of New Jersey and The Jersey Shore. Was South Park’s take funny or offensive?

Can’t get enough of the fist pumping, table flipping and name calling on The Jersey Shore and The Real Housewives of New Jersey? You’re not the only one. 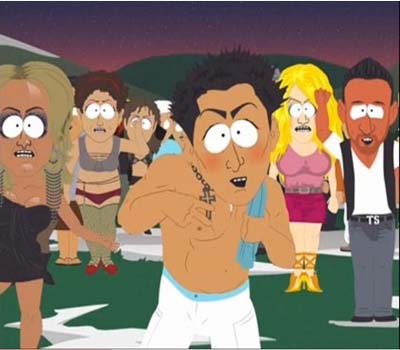 South Park took on the Jersey phenomenon on Wednesday’s episode, spoofing everything from Teresa Giudice to fake tans to poor little Snooki.

If you don’t understand the references — don’t feel bad, it’s a Jersey thing.

And Jersey is taking over South Park. In the episode, a family from New Jersey moves in next to Stan, bringing with them muscle tees, hair gel and a new term for our cultural vernacular — muff cabbage (we don’t know the true definition, but it’s rather easy to guess.)

Kyle’s mom expresses her intense hatred for Jersey types, until it’s revealed that she’s actually from Jersey and that Kyle was conceived in Newark. This brings about an intense identity crisis as Kyle tries to suppress his Jersey ways when Cartman and the rest of South Park decides to fight off the Jersey people before their town becomes part of West New Jersey.

Their attempts to call in assistance from California and Japan fail, so their last resort is to enlist the help of Osama bin Laden and al Qaeda.

Ultimately the South Park folk are able to defeat their Jersey foes with the help of al Qaeda and a few airplanes. Once gone, the bucolic city goes back to normal.

South Park creators Matt Parker and Trey Stone always have a snarky finger on what’s hot in popular culture and world news. Somehow, the duo manages to combine Danielle Staub, The Situation and Osama bin Laden all in one episode with hilarious — and yes, offensive — results.

Nothing is more popular right now than the inexplicably-intriguing band of Jersey reality stars and their penchant for fist-pumping and dill pickles. South Park’s take on the phenomenon was supposed to be over the top, and they achieved it.