Private Practice is getting ready for a dramatic sweeps week with the announcement of its highly sensitive rape episode involving the character Charlotte King (KaDee Strickland). With just a few weeks to go until we find out what happens to Charlotte King, let’s check in to see what the good doctors of Oceanside Wellness are up to this week. 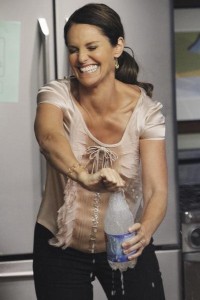 On last week’s episode of Private Practice, the man who killed Dell ended up with his life in Sam’s (Taye Diggs) hands but Sam did the right thing and got him help.

Amelia (Caterina Scorsone) flew to Seattle to make amends with Derek but instead slept with Mark. Pete (Tim Daly) found himself on the wrong end of a gang member’s gun — don’t worry, he talked the man down. So much drama, so little time.

On this week’s episode of Private Practice, entitled A Better Place to Be, views on professional matters are set to stir animosity for the doctors of Oceanside Wellness.

Pete and Amelia have opposing ideas over a high-risk operation to treat a woman who has been suffering from chronic pain throughout her pregnancy. Meanwhile, the new addition of Dell’s daughter, Betsey, puts everyone’s emotions on overload.

Private Practice: A Better Place to Be, airs tonight at 10 p.m.

Read on for more Private Practice