David Arquette has identified Jasmine Waltz as his new girlfriend. We’ve got the scoop on Arquette’s mystery woman. 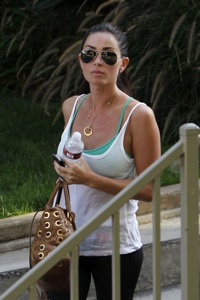 David Arquette admitted his “one conquest” after his split from Courteney Cox is some chick named Jasmine Waltz — but who is she?

Jasmine Waltz is a woman with a past of near-Rachel Uchitel proportions. The professional celebrity girlfriend (not that kind of professional, that we know of) has been tied to Paris Hilton’s ex Doug Reinhardt, British rugby player Danny Cipriani and singer-actor Jesse McCartney.

Waltz, also an actor who has had bit parts in multiple TV shows (including Dirt) and direct-to-DVD movies, became a personal hero when she allegedly punched Lindsay Lohan in the face at an LA nightclub in the summer of 2010.

But Waltz has a secret — or rather, had a secret, because once you start sleeping with a married celebrity all your skeletons pop out of the closet. The mistress has a rap sheet.

In April 2000, Waltz was arrested on charges of petty larceny in Orlando, Florida. Details are unclear, but it appears she stole some cash — less than $300 — and completed six months of probation.

In June of 2000, she pleaded no contest to misdemeanor possession of marijuana. Since she was found with less than 20 grams of pot, she received a suspended sentence and was credited for two days of time served in custody.

Pretty much the opposite of someone who has to act like your mom all the time as Courteney Cox claims, huh David?