While we’re still not fully recovered from the announcement that Courteney Cox and her husband David Arquette are splitting up after 11 years of marriage (we get that they were an odd match but that’s what we thought worked in their favor), there is some happier couple news in Hollywood. 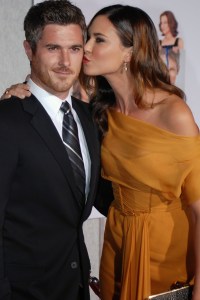 Dave Annable and Odette Yustman were married this weekend in Ojai, California in front of 215 of their friends and family.

According to Us Weekly, the bride, who can currently be seen co-starring with Sigourney Weaver in You Again, wore a Monique Lhuillier gown, Dave wore a DKNY suit and they walked down the aisle to All You Need Is Love by the Beatles, a song which was also used to great effect during the wedding in Love Actually (how good is that movie?).

“I feel like the luckiest man ever,” Annable, 31, told the tabloid, which will be running full “behind the scenes” coverage of the wedding this week. “I married my best friend and I could not be happier.”

This is a first marriage for both actors. Annable was previously linked to his Brothers and Sisters co-star Emily VanCamp, whom he dated and lived with before hooking up with Odette. Interestingly, Emily decided to leave the show this year. Some people say it was a budgetary issue, VanCamp claimed in interviews it was a creative decision since she felt her character had “run its course,” but we’re gonna go ahead and put green money on it being too weird to play husband and wife with her ex-boyfriend now that he’d moved on and gotten engaged to another woman. Not that we blame her.

Regardless, congratulations to Odette and Dave! Now just don’t work together and everything should work out just fine.