David Arquette got the okay from Courteney Cox to reveal details of their split to Howard Stern. 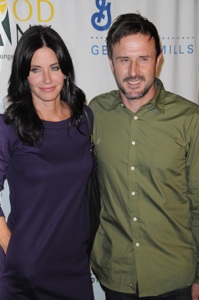 The day after news broke about his split from Cougar Town star Courteney Cox, David Arquette went on Howard Stern and spilled some very personal details.

Many wondered how, exactly, David’s TMI spill would help the situation — the couple is describing their current split as a “trial separation” — but sources tell TMZ that not only did Courteney know David was going on Howard Stern, she okayed everything he was going to say ahead of time.

As a refresher, David discussed how Courteney was tired of acting like his mother, that he drinks too much, that he’s been sleeping with Rachel Uchitel-wannabe Jasmine Waltz because he and Courteney haven’t had sex in four months, and that their daughter Coco took the news of their split very hard.

The source said David called Courteney before the interview and she was “fine” with what David was planning to disclose.

Arquette seems to have had a change of heart about the interview himself, though. He tweeted today, “Thank you all for your Love and support at this time. I’m trying figuring out how to be the best person I can be. but it’s been a process of trial and error. I went on Howard Stern yesterday to provide clarity and honesty about what I’m experiencing but while doing that I shared too much…it’s alright for me to be honest about my own feelings but in retrospect some of the information I provided involved others and for that I am sorry and humbled..Life is a process of spiritual evolution. I’m sure Courteney and myself will emerge from this painful time better people for what we’ve learned.”

A bit late for that.