Lindsay Lohan tried to escape from rehab to get her Coke fix! 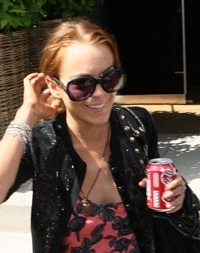 No, not the white powdery kind that sent her to the Betty Ford Clinic in the first place — good old fashioned Coca-Cola.

A source says Lindsay Lohan and a pal found out that the medical center next door had a vending machine stocked full of Coke and decided to make a break for it. In an I Love Lucy-worthy move, the pair tried to hop a fence to reach their precious caffeine, but the accomplice’s shirt got snagged and their dastardly plan fell to pieces.

The source said, “Lindsay and her co-conspirator were forced to give it up and flag down a volunteer, who was crossing the center’s grounds on a golf cart. The pair was safely returned, decaffeinated, to their hall, where they were the center of a process meeting over what they had done.”

Caffeine is considered contraband in many rehab facilities because of its stimulant properties — as a psychoactive drug it could stimulate cravings for the harder stuff.

read on for more Lindsay Lohan