David Arquette made an impromptu call to Howard Stern on Tuesday to discuss his sex life with soon-to-be ex Courtney Cox. Was it his odd attempt at getting her back? 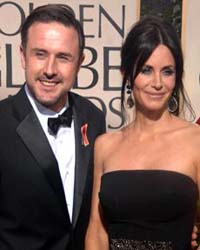 David Arquette was sorely mistaken if he thought calling Howard Stern on Tuesday was a good idea.

Arquette called in to the Sirius-XM host’s show on Tuesday to dish all about his sexless marriage Courteney Cox. Apparently, the couple didn’t had sex for four months prior to the breakup.

Cox wants a husband, not a son

Arquette told Stern that the relationship went downhill after the couple traveled to Michigan this summer to film Scream 4. The actor said that Cox told him that she was “tired of being his mother.”

We can see it. If Arquette’s public antics are any indication, he’s not the most mature man on the block. His phone call to Stern solidifies that.

After dishing all the personal details of his life, Arquette went on to tell Stern that Cox is an amazing mother. He claimed that he never cheated on the Cougar Town actress — saying that his short-lived fling with Jasmine Waltz was just that, a fling.

“Does she wish she could edit what comes out of his mouth? Sure,” The source told People. “But nothing surprises her at this point. What’s amazing about Courteney is that she doesn’t get caught up in all the ridiculousness.”

Sadly for Arquette, it looks like Cox didn’t expect much more from him than a tell-all rant. This doesn’t bode well for a potential reconciliation of the dark-haired duo.

“He felt really attacked and his first instinct was to defend himself,” the source went on to tell People. “He was totally bombarded with a lot of negative attention, most of which was inaccurate.”

Sorry, buddy. Wanting to clear the air is one thing, but dishing the deets on your private sex life — especially with someone as private as Cox – doesn’t bode well for your future together.

The best option right now? Get your act together and figure out how to successfully co-parent your adorable daughter CoCo.

read on for More Celebrity Breakups