The results show for Dancing With the Stars came and went and as the curtain fell, it was the last dance for The Situation. 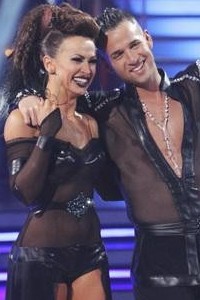 It had come to light that The Situation was not pleased with the harsh comments from the judges on Monday night’s Dancing With the Stars and he took it a bit too hard. Well, the votes couldn’t pull the Jersey Shore reality star out of the danger zone. Let’s see what went down.

As per usual with Dancing With the Stars, the top three performers of the night were sent to safety — Audrina Patridge, Jennifer Grey and Brandy. We knew it would happen. Jennifer Grey and Derek Hough reprised their awe-inspiring Argentine tango from the previous night to the delight of the judges.

Bristol Palin and Mark Ballas danced a vacant rumba Monday night and were thrown into the jeopardy pool with Kurt Warner and Anna Trebunskaya. Not sure I agree with America on Kurt Warner, but maybe athletes are running their course on the show. Joining them was The Situation and Karina Smirnoff who pulled off some pretty difficult lifts.

The Goo Goo Dolls made an appearance for acoustic week along with some pro dancers and a few So You Think You Can Dance graduates.

The Florence and the Machine number was a bit creepy yet interesting. They used the round platforms to feature dancers with the music. I like it better when a musical guest just sings and the pros dance around them. No hoopla.

Back to the eliminations. Joining the others to dance another night were Kyle Massey and the sultry Rick Fox. Florence Henderson’s rumba was deemed raunchy but she slid through to live another week.

Kurt Warner was taken out of jeopardy as was Alaska’s treasure, Bristol Palin. I was on the fence about Bristol Palin. The Situation was getting better and he had a lot of heart. He left it on the floor and I think he would have been entertaining to keep in the game.

Do you agree with America’s choice? Tell us.