Tammy Lynn Michaels, the ex-wife of Melissa Etheridge, says the singer isn’t giving her enough money to feed their kids. 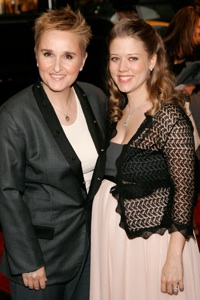 Tammy Lynn Michaels was blindsided when longtime partner Melissa Etheridge filed for a dissolution of their legal domestic partnership — and now Tammy Lynn says Melissa needs to cough up more cash to feed their kids.

Tammy Lynn blogged her woes like a good celebrity for all of us to see. Here are some highlights and pardon the lack of grammar and spelling:

“‘pays all the bills’

‘pays all the bills she chooses to pay’

‘pays all the bills her people thinks are important enough to pay’? is more accurate

today i was shopping for birthday decor…4th next sunday!?little cash for lunch??nope- not enough funds no food

what the [expletive] is marriage all about anyway? i thought i did everything i was supposed to do. support support support. love family, be there, love, right? all for naught or have i still everything to learn about love? and that was nothing? or the letting go of this is thee lesson of loving. argh.

someone told me that chemotherapy just messes with a brain chemistry, changes the brain, the person, and makes them just in general different. they might b meaner, or illogical, often imbalanced, or whatever. but they just don’t come out the same. hardly ever, i am told. and they can’t help it. it just is.

and i think about that alot too.”

Double whammy — charging Melissa with financial neglect and blaming it on having cancer.

For the record, Etheridge pays Tammy Lynn $2000 a month in child support, but Tammy says it’s not enough. Because of the ages of her kids and their schedule she is not able to take acting jobs, and she can’t afford child care and all other expenses on that small amount of money. She continued her rant on that very subject, in fact:

“someone asked about getting a job. okay. well. let’s talkaboutthisheregirlfriend…i have “help” until 2 pm a lot. i can’t tell my bosses that i can work each day until between the hours of 830 and 145. tv hours aren’t like that, waitressing ours aren’t like that sadl…strippers hours aren’t like that, whores’ hours aren’t like that, secretary hours’ aren’t like that, starbucks’ jobs aren’t like that… crossed my mind this morning to get a paper route, though. that’s a quick job, but i bet a lot has changed since i was 11. but thank goodness i was able to go home that day and eat- not like in haiti where you eat dirt cookies. while i drove, i spit brown stomach bile into my cup, and rinsed with water. then when i got home i simply ate a bagel. it’s not really great for my stomach to sit empty right now. like being pregnant, but no baby inside. but then my friend and i laughed… cuz once i am able to get my twins so set and solid and older, Then there’s jobs for me, and i’ll be open.”

No comment from the Etheridge camp. The pair has two children together, twins Johnnie Rose and Miller Steven. Melissa has two other children with former partner Julie Cypher, Bailey and Beckett.