British actor Dominic Cooper is quite the ladies’ man, at least if you judge by many of his film roles. Cooper sang while romancing Amanda Seyfried in the musical film Mamma Mia, rocked Keira Knightley’s ordered world in The Duchess and now you can catch him as Gemma Arterton’s wild, self-absorbed rock star lover in the ensemble comedy romp Tamara Drewe.

On the flipside, the actor told SheKnows that he is proud of his work as the evil Butcher of Baghdad, the son of Saddam Hussein in the upcoming The Devil’s Double and he’ll play both Marilyn Monroe’s business partner soon in My Week with Marilyn as well as Iron Man Tony Stark’s dad in the new Captain America: The First Avenger film. This is one busy fellow. 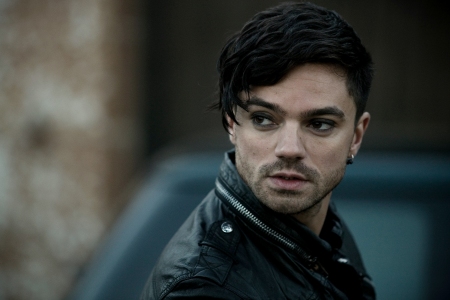 SheKnows is sitting down exclusively with casually-dressed Dom at the Four Seasons Hotel in Beverly Hills to get the scoop on his fun character in Tamara Drewe. We found out that the actor comes from a musical family, had his own band as a kid and mourns the fact that there aren’t any cool record album covers to admire much anymore. He’s still in love with Amanda Seyfried’s dog Finn and used that relationship to work with rocker character Ben’s beloved doggie in Tamara.

SheKnows: You’re playing a rocker. Were you in a band?
Dominic Cooper: My brother has always been in bands since I can remember and I had a ridiculous band, just had fun doing it. This film was finally time to collaborate with my brother who I think is a great musician. I hate it in films where you see bands and you just don’t believe them. As wonderful as (director) Stephen (Frears) is, I didn’t know if he’d be the right person to audition a band or put together a band that would be believable. These 16-year-old girls in the film are obsessed with Ben and the band. I wanted it to be completely truthful so I spoke to my brother and we wrote some music and recorded it and Stephen really liked it. I think it’s really catchy. My brother wrote it all with a friend of his. I recorded a song on the end title track.

SheKnows: But you’re not a drummer like your character Ben, right?

Dominic Cooper: No, but I learned. It happened quite quickly. I loved it. I learned how important a drummer is in a band. It really holds everything together and what fun! What a lifestyle to perform at a rock festival in front of adoring fans. Of course, our film fans were obligated to love the music which is very handy but drums are fantastic fun and therapeutic just to get lost in the rhythm and it’s very concentrated as well, very focused. 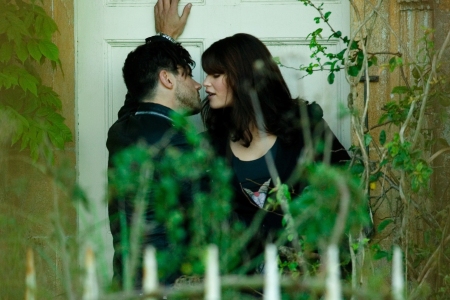 SheKnows: You’re very funny in this.

Dominic Cooper: Thanks. When you’re doing comedy, you need to take great risks and be prepared to fail all the time. You’re trying to be funny and if you’re not, you look like a fool. Stephen (Frears, director) let us elaborate and be very creative.

SheKnows: What part of the rocker lifestyle do you envy and what are you so glad isn’t a part of your life?

Dominic Cooper: I’d hate to be as self-involved as Ben is but I think to have a successful band is great. The music industry is in a very difficult place I think. It’s rare that bands are nurtured by record companies now so they can continue to produce great music. The way we buy music now or have access to music is streaming or you buy singles. You don’t buy albums which used to be these fantastic pieces of artwork. They’re beautiful. It’s not only the image but how an album works from first song to end song, they’re masterpieces, really, if they’re made right. I hope that that can continue. It might be a dying thing. You don’t listen to the whole thing.

SheKnows: You were very convincing in the film with Ben’s beloved dog. Do you have a dog? Do you want a dog? 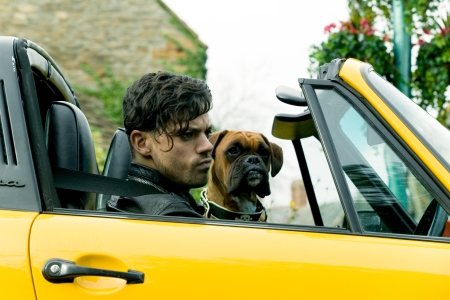 Dominic Cooper: I do. I’d love a dog. There’s a lovely dog called Finn. He lives here in L.A. with my girlfriend (Amanda Seyfried). He’s the most beautiful thing in the world and I miss him to bits. But it’s the first time I’ve ever been into dogs. He’s stunning. I love having had time with Finn, so working with the dog in the film was gorgeous, but he’s rather badly behaved. His name is Albert and he’s just won an award but he might not if they knew how badly behaved he was on set. But he was great.

SheKnows: Ben has a ton of rabid fans. Have you ever had an endearing or annoying fan experience?

Dominic Cooper: The fact that people want to watch your work or appreciate it, I love. It means a massive amount. I don’t get recognized a lot which I adore. But, every so often someone comes up and appreciates something quite rare that you’ve done or a stage play. There’s the joy that Mamma Mia brought to people or the intellect of The History Boys and how that affected people. You can get lost with “What’s the point? What am I doing it all for? Is it just for self-fulfillment?” But, when it actually affects people and changes their day or something in their life, you feel very rewarded. 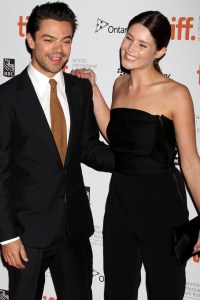 SheKnows: Which musicians were you into as a teen?

Dominic Cooper: The Cure, Robert Smith. My brother who did the music is four years older than me and he was into Duran Duran and Kraftwerk and a lot of the 80’s electrobands. But, my brother who was 12 years older, was into soul and Motown and blues. They didn’t agree with each other musically at all but I appreciated both. My mum was into a lot of classical and played classical piano music. So music has had a massive impact on my life. I adore how music brings back memory to a specific time and place and I love how you can recognize a piece of music from the first note. It’s just incredible. I’m terribly sad that I didn’t learn any instruments properly. In my band, I’d sit down with the guitarist to write songs.

SheKnows: Do you still have all the songs?

Dominic Cooper: We lost our band book. I remember a lot of the songs but what we were writing at the age of fourteen, how you’ll never love again and your heart was broken, it was ridiculous, all those raw emotions. We lost our book and I think I was responsible. I was the last one seen with it anyway.

SheKnows: Ben has a great rocker look in Tamara Drewe. Did you have input into his look?

Dominic Cooper: The costumer (Consolata Boyle) was brilliant and we collaborated very much together on it. I absolutely didn’t want him to look like he did in the graphic novel (on which the film is based). He looks rather boring. Drummers hide behind the drum kit and don’t want all the attention. You rarely recognize them, even in the biggest band in the world. We thought we’d make him more elaborate, colorful and give him a distinct silhouette. We played with the hair and his eye make-up. All those things really help with the performance. 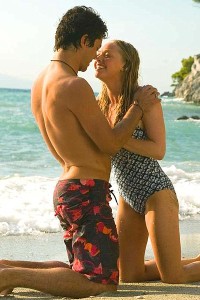 SheKnows: Was there something you added to the character that wasn’t in the script that Stephen thought was brilliant?

Dominic Cooper: When I was flirting with Tamara with the drumsticks and I stuck one between my toes, that was me and Stephen was saying “Keep it in! Keep it in!” So that was great. The thing with him flicking his hair, he kept it in. Little things like that. But he makes you feel relaxed enough to be bold like that.

SheKnows: Did you get to hang around off set with Gemma Arterton at all?

Dominic Cooper: We did a bit. I’ve got a similar background to Gemma. We grew up in very similar parts of London then we went for the same kind of training so she feels like a mate. The first day I met her we were on set doing a scene and we just got on. It was very easy, relaxed, like an old friend I’d known for a long time.

SheKnows: Coming from the big city, how did you take to all the cows and the bucolic country setting where you shot the film?

Dominic Cooper: I love going down to the country and visiting but I’m a city boy. It takes me a long time to settle back into the country life. I also love what a city offers — different cultures, different art and being able to go to the theater on an evening or an exhibition and go to different restaurants every night. We’re very spoiled but it’s lovely to get away.

SheKnows: You, Gemma and co-star Luke Evans are all classically trained actors. Is it just different working with actors who’ve had a lot of stage experience?

Dominic Cooper: I don’t think it’s a necessity to have that. Being in a stage play in a big theater in London, that technically helped me a lot. It teaches that it’s not an easy profession to be in and often it doesn’t work and you don’t work. Some of the most talented people in my (graduating) year didn’t end up doing a great deal of work and I thought they were wonderful so it gives you an idea of the struggle. I feel sorry for people who are thrown directly into a movie and it’s very successful and they think that’s how things will stay for them. It’s not the truth. It’s a fickle world. I love the fact that I can always go back and do a play when I’m very old. But some of the most talented actors in the world haven’t done a day’s worth of training.

SheKnows: Is there a character in history or literature that you would still love to play some day?

Dominic Cooper: Well, I’ve just played Saddam Hussein’s son Uday in The Devil’s Double. It was just exhausting. But it was the only thing I’ve done on film that came close to a theatrical performance because he (director Michael Thomas) let me run away with it. There are scenes where he’s just out of control, losing his mind and he doesn’t care what he does or what anyone thinks of him. He was the Butcher of Baghdad, an awful human being. The relief came in the form of (also playing) his double (Latif Yahia), the poor man who is in a situation he can’t get out of. He was actually there on set and had lived through the pain. You spend the first part of the day being a maniac and then play the moral grounding of the piece as well. I should have taken a long vacation after that.

SheKnows: Can’t wait to see that one. Anyone else in real life you would love to play?

Dominic Cooper: I’m playing Milton Greene, Marilyn Monroe’s business partner in My Week with Marilyn at the moment in London.

SheKnows: There you go. You’re on a roll and, on the fictional side, playing Tony Stark’s dad Howard in Captain America. Doing both at once? Isn’t that…?

Dominic Cooper: Yeah, I know. I’m a bit worried about that. It’s going to get very hectic. I won’t have a life.