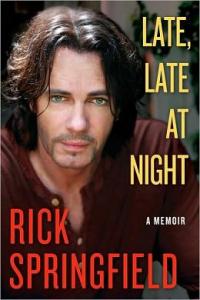 Rockers and actors are known to have some fascinatingly wild stories, but Rick Springfield has seen quite a life beyond his four decades in the spotlight as a pop icon and daytime star.

In his new book Late, Late at Night, the 61-year-old opens up about his devastating bouts of depression and suicidal thoughts and why he dropped out of the spotlight at the height of fame.

Raised an Australian army brat, Rick Springfield (born Richard Lewis Springthorpe) spent his childhood moving around his home country and England. When he was snapped up by Capitol Records and moved stateside in 1972, the self-taught musician already had a budding solo career in Australia.

In the U.S., the handsome 22-year-old wanted to rock, but instead found himself suddenly labeled a teen idol. He also found himself in his first “grown up” relationship with 15-year-old Linda Blair (The Exorcist).

Springfield had a bumpy start in the Hollywood music biz and he describes his beginning in America as a dark time, but the 1980s would change everything. Springfield broke into TV with Mission: Magic!, The Rockford Files, Wonder Woman, The Incredible Hulk and The Six-Million Dollar Man. That was just the beginning.

Dr. Noah Drake showed up on General Hospital in 1983 and daytime fans claimed actor Rick Springfield as their own. At the same time, his single Jessie’s Girl skyrocketed to number one and Springfield found himself a major star splitting time between touring with his music and clocking in as the doctor on General Hospital.

The decade brought more music and some big screen action, not to mention a marriage to Barbara Porter and fatherhood. It wasn’t an easy time, however, and Springfield’s struggles were reflected in his 1988 album Rock of Life.

While Springfield talks of depression in his new book Late, Late at Night, he was known for being high energy. All that came to a horrifying halt when a motorcycle crash almost killed him before the Rock of Life tour.

It was a long, tough recovery, but it wasn’t the end of Springfield. He kept busy in the 1990s and many would call his Karma Tour and the associated 1999 album his real comeback. The new millennium sent Springfield to Vegas for his EFX Alive show and after a 23-year absence, he even returned to General Hospital for a successful run.

Obviously, this recap of the star’s life has been painted in large brush strokes. To get the full story on the life of Rick Springfield from the man himself, pick up his new autobiography, Late, Late at Night, available now.