Dina Lohan ignored police warnings years ago that her daughter, Lindsay Lohan, was heading down a dark path. 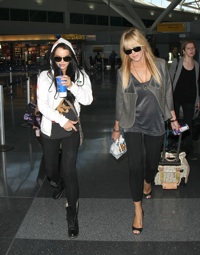 Dina Lohan has been ignoring warnings about her troubled daughter Lindsay Lohan since 2003.

Law enforcement sources say the LAPD tried to warn Lindsay’s mom the then-17-year-old was already spiraling out of control.

Lindsay moved to LA by herself, with no parental supervision — or any adult supervision for that matter — at 17.

Here’s how it went down, according to TMZ. Lindsay had a stalker, and the LAPD was put on the case. An investigator followed her around to keep her safe and bust the stalker. He soon discovered that every place he followed her happened to be a club.

Not only was the very underaged actress partying it up in clubs all over LA illegally, he was concerned she would be drinking and driving. Law enforcement called Dina to warn her about her daughter’s dangerous behavior, but Dina never picked up the phone — nor did she return multiple voicemails left by the investigator.

A Dina defender told TMZ, “If law enforcement was so worried about Lindsay’s safety, why didn’t they send someone to Dina’s home to inform her?”

Wait, what? Because Dina can’t be bothered to return a simple phone call about her daughter’s safety, California taxpayers should spend their money to fly an LAPD officer to NY (where Dina still lives) to have a chat with her about Lindsay’s bad choices, which are the direct result of her own bad parenting?

It’s no wonder Lindsay is so self-absorbed. As they say, the apple doesn’t fall far from the tree.