Christina Aguilera has reportedly split from Jordan Bratman, her husband since 2005. 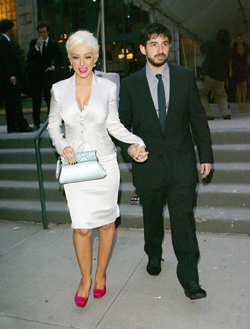 Christina Aguilera and Jordan Bratman have reportedly been separated for a few months, a source told UsMagazine.com.

“They were very much in love,” a source said. “But over the last six months, it became clear they were more like friends than husband and wife.”

In an attempt to reignite the spark, Aguilera “proposed their August trip to Italy to rekindle their relationship, but it didn’t help.”

What about their 2-year-old son? The source says son Max “is their main concern.”

“Christina is doing her best to be a great mom. She has a lot to juggle, but she’s learning how to make it work and balance it all,” the insider reported. Aguilera has been bringing Max to the studio where she is working on the soundtrack for Burlesque.

The couple has not filed for a legal separation or divorce, so let’s hope they can work it out!

What other celeb couple announced their split this week? Find out here!

read on for More Christina Aguilera