Remember when Kim Kardashian posed nude for Playboy and then regretted it? Well, Kardashian is doing it again. This time she is nude for the cover of W magazine — and she doesn’t regret a thing! 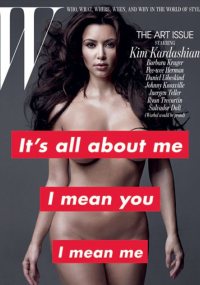 Kim Kardashian, clad in only silver body paint, appears on the cover of W‘s November issue. The 29-year-old reality star is opening up about her public image and body perception.

“I’m not a drinker, and when I’m up on the table dancing, it’s for the picture,” she said. “Then I sit right back down. I play into the perception of me, but it’s not really me. And the show reveals that.”

Kim Kardashian’s E! reality show, Keeping Up with the Kardashians, is instrumental in improving her self-esteem. “I used to think, I have to be this or that or skinny, and now, because of the show, everyone is embracing just me, which has given me such a confidence,” Kardashian said. “Now, I’m like, ‘Why did I ever give that feeling the time of day?’ I’m so mature now. I’m a grown-up version of myself.”

Growing up isn’t always easy but the star is realizing change is good. Kardashian thinks back to her 2000 walk down the aisle to music producer Damon Thomas. “For my wedding, I wore black leather pants, a black leather top, and Prada wedges. No flowers. And no family. It was so bizarre. I was a different person then — as I said, I always wanted to be a housewife, and I wanted to have kids at a young age. I was insecure and dependent, really the opposite of who I am today,” Kardashian said.

The couple divorced in 2004, and Kim Kardashian is moving on and tackling the tabloids.

“I’ve learned to ignore everything. In the beginning I thought I was too sensitive for this. I’d Google myself and it would freak me out. Now I could care less if they say I’m pregnant with twins by my brother.”

I wonder if Kim Kardashian had felt this healthy when she posed for Playboy if she’d still regret it. I think she’s finally comfortable in her own skin.