The Situation, aka Mike Sorrentino, danced an Argentine tango Bruno Tonioli called a “terrible mess” on last night’s Dancing With the Stars episode and he’s not too happy about it. 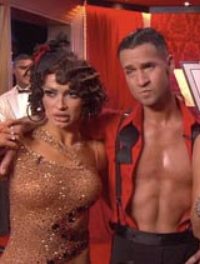 The Situation ended up at the bottom of the leader board on last night’s Dancing With the Stars acoustic night and he’s pouting about it.

The Situation was allegedly seen in the parking lot, smoking a cigarette and stewing over the situation while a friend tried to comfort him.

“I don’t know what their deal was. I really don’t know,” The Situation told UsMagazine.com later that evening.

“I was upset. I actually stormed off upset because I tried so hard. I really did. I changed my haircut, I don’t know.”

Jersey Shore’s ab-tastic star added, “Once I landed all those lifts and the judges were trashing me? I’ll be honest with you, it was in one ear and out the other. In the back of my head, I knew those lifts were extremely hard. I tried my best, and if they didn’t see it and wanted to be negative, so be it.”

His partner Karina Smirnoff was proud of The Situation. “Honestly, I think he showed quite a lot of improvement last week. I think we can take it as a compliment,” Smirnoff said.

“They wanted to see more, and we appreciate their faith in us, but sometimes, come on, throw us a bone!” 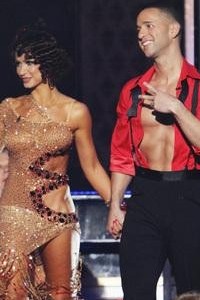 ??F?ancy lifts, a new haircut, and Karina Smirnoff is in one piece? Come on, judges, give the couple a break.

Smirnoff is also hoping the negative feedback has a “reverse effect, where the judges are really mean and the fans really stand behind us, because we really want to make it through. We have so many great ideas for next week. I think we’re going to be okay, though, regardless.”

Who do you think is going home on tonight’s elimination show of Dancing With the Stars?