David Schwimmer is no longer in the friend-zone as Schwimmer married in a secret ceremony that no one saw coming. 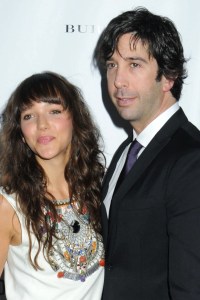 The best part is the couple managed to keep it quiet and no one heard so much as a peep about the nuptials until now.

David Schwimmer and Zoe Buckman reportedly met in 2007 when Schwimmer was directing his film Run, Fat Boy, Run in London.

Buckman was her future husband’s waitress at the Cuckoo Club in London’s West End. Like all women in love, Buckman followed Schwimmer back to Los Angeles and the rest is wedded bliss.

Not all was kept a secret in David Schwimmer and Zoe Buckman’s relationship. Back in March, the couple went public with their engagement.

Hopefully, Schwimmer will have a bit more luck with his marriage than Friends co-star Courteney Cox. The news was announced that she and her husband of 11 years, actor David Arquette, were calling it quits.

They say news comes in threes. I wonder if Jennifer Aniston will be the third of the Friends chain to break some love info. We’ll be watching. Good luck to all the Friends couples.