With the competition heating up on Dancing With the Stars, the scores were broken into two categories — performance and technique — for a possible score of 60. To make it even more challenging, the stars were tasked to perform either the rumba or Argentine tango to an acoustic set. Why is this hard? According to the pros, you actually have to listen for the beats. 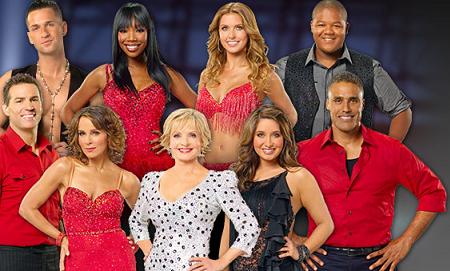 Audrina Patridge sizzled last week with a smart and classy waltz but this week Jennifer Grey and Derek Hough took The Hills beauty and her partner Tony Dovolani down with a hot and powerful Argentine tango the judges deemed “incredible.” In fact, it was so incredible it was worthy of the first tens of the season. Len praised the Dirty Dancing star’s technical side as “fantastic.”

Brandy and Maks were hot on Jennifer Grey and Derek’s heels for the top spot. “I’ve been waiting for the real Brandy to show herself,” Carrie Ann Inaba said after the performance. She got what she wanted. Brandy and Maks finally seemed connected. Their rumba oozed romance and passion. The judges praised the performance level but blamed her hands for spoiling the technical aspect. That was minor compared to the rest.

Check out how the rest of the couples tackled acoustic week.

Dancing with the Stars: The dances

Audrina Patridge mopped the dance floor with her competition last week but this week she didn’t live up to the hype. She didn’t take us on a journey with the performance. Her lifts were dubbed as a bit sloppy, yet the judges praised her for lighting up in the eyes. She just needs to elevate moving forward and bring it every time. She did a fine job, but fine isn’t what we were expecting after last week.

Poor Bristol Palin got slammed for being vacant in the performance. The judges found her almost clean in technique but they’re waiting for more. I’m not sure I agree that her face or performance went missing. I thought she got down and dirty during her rumba, but that’s just me.

The Situation and Karina

The Situation found himself in a definite situation and not a good one. His Argentine tango was a “terrible mess” according to the judges. He did do some fancy lifts and Karina made it out alive, so I guess that was good for the Jersey Shore star. The two found themselves at the bottom of the leader board.

Can we say uncomfortable? Florence Henderson’s rumba was too sexy for one of the judges, but ironically it wasn’t Len, it was Carrie Ann! Her technique got better, but the blush meter went up on that dance. It’s not right to see Mrs. Brady seductively bite her finger or have her leg groped.

Kyle Massey and Lacey Schwimmer never disappoint me, even if their scores fall in the middle. While the 19-year-old Disney star looked awkward exuding sex appeal during the rumba, it worked. His footwork, which Len called atrocious last week, improved by leaps this week. As always, his performance level was through the roof.

Rick Fox tried to up the hot ante by completely taking his shirt off this week, but Cheryl Burke stopped him — thank God for Len she did. Their Argentine tango was one dimensional on the performance side but better on the technical side with some pretty impressive lifts.

Kurt Warner danced a fantastic foxtrot last week but this week his Argentine tango didn’t leave the judges breathless. The technique got better and the performance had chemistry but the judges found something missing. It was just there.