Jennie Garth became famous with Beverly Hills, 90210, as well as her turn opposite Amanda Bynes in What I Like About You. Now, having recently left the rebooted 90210, Garth is taking a step back to work on a job that is her favorite — motherhood.

As part of that effort, Garth and husband Peter Facinelli are building a green house from the ground up. Garth also participated in the October 6 International Walk to School Month in an effort to raise awareness about the lost art of walking to school. Garth reported that many parents drive their kids to school now and talked about something from our childhoods that’s hardly ever done anymore — walking to school. 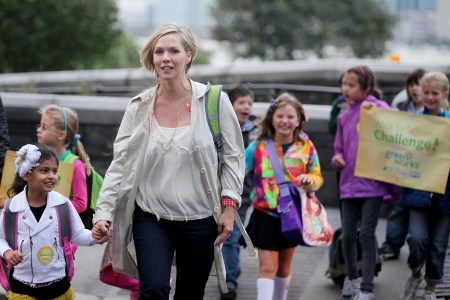 Facinelli and Garth’s house is a green one and as parents of three young children, they feel it their responsibility to lead by example.

Garth sat down to talk about the International Walk to School Day effort and the Greenworks partnership, as well as her life on camera and how now, priority number one is not the Hollywood spotlight, but brightening the world of her young children.

SheKnows: First of all, there are a lot of things that you could attach your name to, bring a little spotlight to, what was it about this particular effort that compelled you to be a part of it?

Jennie Garth: Well, I’m a fan of Greenworks. I like their products and so I think that they’re a good company to work with. I teamed up with them to do this Celebrate Walk to School Month that I think is important. I walked to school this morning with some local kids here in New York and they were all really excited. I think it’s a good time for them to spend with their parents. It’s good for them to get out and get exercise. It wakes their brain up on the way to school and it’s good for the environment because you’re not using gas — nothing bad about this at all. 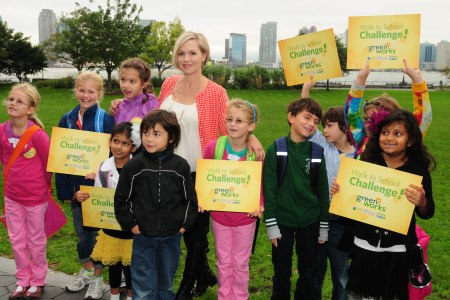 SheKnows: I hate to think of walking to school as taking us back to another time but it does these days. Speak about your experience in what you remember walking to school. Was it as much a part of the school day as being in school itself?

Jennie Garth: My experience is a little different. We lived really far out in the country and I rode a school bus to school. I remember walking to the school bus and that was always fun. I would walk there with my sisters and we had to walk half a mile or three quarters of a mile to get to the school bus. It was good times and great memories of being with my siblings and throwing rocks with them, helping them with studies or whatever it was.

SheKnows: This morning, the experience of walking to school with you, did you get the sense from the kids that this is something that they will ask their parents to do more and more because of the time they had this morning?

Jennie Garth: I think all the kids definitely had a good time this morning. You could tell that they were excited. A lot of them actually live close by and are walking to school all the time. In New York that’s easier to do probably than in L.A. or different cities. I said to them today, “If you don’t live close enough to walk to school then have your parents drive you almost to school and finish it up with a little walk.” They were also excited by the challenge that Greenworks Cleaner Projects is sponsoring by going on their Facebook page. Kids and their families can enter into this challenge and be eligible to win $5,000 in grants for the school and other cool little gifts and prizes. So that was exciting to them. 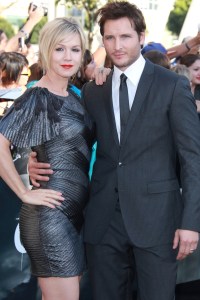 SheKnows: What is it as a mom that you are hoping to transfer to children across the country about having a better way of life than maybe we’re living right now?

Jennie Garth: I think it’s just promoting the positive things that kids do. Whatever I do charity-wise, I try to make sure it’s something that is a good cause, something that has a positive message whether that message is for the kids or the parents that are raising the kids. Whatever I do, I make sure it’s something I feel good about. If my voice and me talking about something, or promoting something or showing up somewhere, can help for a better world somehow than that’s easy for me to be involved with.

SheKnows: Do you think it’s something that’s relatively easy for parents to adopt some of these things themselves that maybe they don’t normally?

Jennie Garth: Definitely, just by walking to school, big change can happen. I started walking my daughter to pre-school and she loves it. It starts her day off in such a better way rather than strapping her into the car seat and having the TV on in the car. It starts her out excited and her day begins with nature and fresh air. That makes a big difference.

SheKnows: You started acting early, what was it that first appealed to you about this line of work that’s not exactly easy to get into? 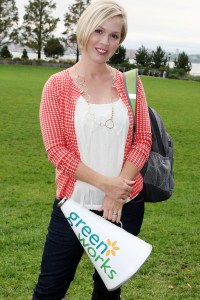 Jennie Garth: I got lucky for sure. I think that pretty much ninety-percent of the business is luck. We’re all doing the same thing out there. There’s no rhyme or reason to it most of the time. I started when I was 18, I believe, no maybe 16, and I never really expected to be where I am today. I’ve done serious television. I’ve done sitcom television. I’ve done movies. I’ve traveled to do movies and at this point in my game, I’m happy to be home with my girls and do little things like this where I can go out and see a lot of the moms that have young kids and are my age. I’ve slowed down on the acting. I don’t want to spend my whole day waiting for lighting and cameramen. There are other things I want to spend my time doing, like being a mom to my kids.

SheKnows: There are little ones waiting for you…

Jennie Garth: Oh my goodness and they’re not very patient either [laughs]. They came with me and Peter when we did a movie for Hallmark recently and they loved us doing it. My husband wrote the script and it was a really great project. But, I realize every time I work, I realize why I don’t work very much. I’m burned out on the hurry up and wait and the whole schedule of it all.

SheKnows: Good for you guys to be able to do it together as a family.

Jennie Garth: We always try to keep it in the family.