Is Miley Cyrus’ new music video, Who Owns My Heart, another attempt for her to shed her Hannah Montana image? Parent’s groups are calling it “sexualized,” while I’m calling it, well, unoriginal. 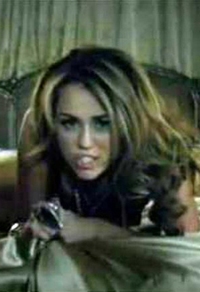 Miley Cyrus is trying to shock us again, with her new Who Owns My Heart video showing the 17-year-old rolling around, blindfolded, on a bed in her undies — before entering a smoky nightclub to dirty dance with both men and women.

who owns my heart? not us!

We get it. You no longer want to be Hannah Montana. From her multiple tattoos, to the Miley Cyrus dirty dancing video with her 44-year-old producer and yet another video of her writhing around in her undies (remember Can’t Be Tamed?), I can’t help but think of a young Britney Spears who both shocked and fascinated us — and we all know how that story ended!

“I’m a completely different person now,” Miley told MTV News, saying she was tired of “many people in life telling you who you should and shouldn’t be.”

The Miley versus Taylor comparison

It is tough to shed the Disney image and show you have moved on and are growing up, however I think Cyrus took the easy way out. Many of her songs are good and can stand on their own, but her videos are so obviously over-sexualized and overdone for a 17-year-old that it comes across as unoriginal and appears like she is trying too hard.

I’m sure Miley hates these comparisons, but I really admire 20-year-old Taylor Swift and her ability to transport you to a more innocent time — and Taylor’s legions of fans prove you can succeed on talent without resorting to an over-sexualized image. Cyrus has the talent and the charisma to be a superstar (and she obviously already is) but her new image may hurt her more than it helps her.

The Parent’s Television Council President Tim Winters talked to TMZ about the situation. “It is unfortunate that she would participate in such a sexualized video like this one. It sends messages to her fan base that are diametrically opposed to everything she has done up to this point. Miley built her fame and fortune entirely on the backs of young girls, and it saddens us that she seems so eager to distance herself from that fan base so rapidly.”

There will be some 17-year-old girls who are fascinated with Miley and look up to her, but, let’s face it, Miley’s job isn’t to teach our kids, that is our job! Kids will be bombarded with over-sexualized images in the media (if it wasn’t Miley, it would be someone else!) and it is our job as parents to talk with our kids about it, letting them know what is and what is not appropriate.

Actually, maybe we should even be thanking Miley for providing a teaching moment.