Courteney Cox and David Arquette have split after 11 years of marriage. 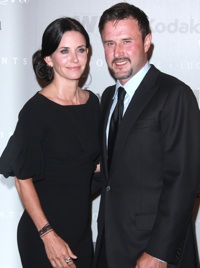 Courteney Cox and David Arquette have split after 11 years of marriage, say sources close to the couple.

TMZ said the pair has been separated for “several months” but that they are still maintaining a friendly business relationship with each other.

Rumors have been swirling for well over a year that there was trouble in the couple’s marriage. In fact, as recently as June, Courteney was alleged to be hot and heavy with her Cougar Town costar Brian Van Holt — a charge Arquette denied.

In June, Arquette talked about how perfect and wonderful his marriage is. “You know, it’s weird, because it turns up in the tabloids, and your friends start calling you like there’s a problem,” Arquette told People. “Like, they say, ‘If you need to talk,’ you know. Hey, we don’t need to talk. There’s nothing . We have a really great, beautiful relationship… and I feel blessed that she’s my wife and we have an amazing family.”

Of course, similar rumors that David was cheating have been going around for even longer.

So, what’s the truth? Stay tuned to SheKnows as this story develops!