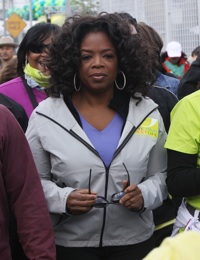 Oprah Winfrey says she is “profoundly disappointed” at the acquittal of Tiny Virginia Makopo of sexual assault on students of the media mogul’s school for girls in South Africa.

Makopo was accused of sexually assaulting a teen student and a fellow supervisor, as well as trying to kiss and fondle other young girls at the school.

A spokesman for South Africa’s National Prosecuting Authority said Makopo had been cleared of all charges. “The magistrate indicated that the state did not prove itself case beyond reasonable doubt on all the charges. We won’t be appealing the judgment,” said Mthunzi Mhaga.

But Oprah is standing by her students. “I will forever be proud of the nine girls who testified with the courage and conviction to be heard,” she said, continuing that the school’s current staff “is committed to providing a nurturing educational environment so that all of our girls may continue to flourish. And they are indeed thriving.”

The Oprah Winfrey Leadership Academy for Girls opened in January 2007 and aims to give girls growing up in poverty a quality education.