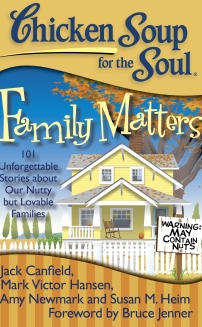 We continue our exclusives featuring a chapter from the immensely popular Chicken Soup for the Soul books with our look at Patton’s Confessions of a Decorating Junkie!

Chicken Soup for the Soul exclusive

A good decorator not only plans and schemes, but he also knows how the job is done.
Albert Hadley, The Story of America’s Preeminent Interior Designer

It happens each spring. Walking home from the farmer’s market, my tote filled with asparagus, strawberries, and lavender honey, I pass Irv and Patty’s house. My neighbors have hauled an eight-foot-tall wooden Easter bunny onto their lawn. She’s painted pink, wears a straw bonnet, and carries a basket of eggs in one paw. A picket fence laced with wooden flowers stands at her feet. I choke up at the sight of such decorating excellence. At times like these, I know I’ve found my spiritual home.

Go ahead, laugh if you want. I’m a decorating junkie. The neighbors may whisper about my husband and my continued childlessness, but no one suspects the holiday boxes I’ve hidden behind the tools in our shed.

What attracts me is the limitless nature of the sport. Anyone can collect a few things for Christmas or Chanukah — that’s more or less expected. Halloween and Thanksgiving are also easy for the decorating novice. But it takes skill to decorate for April Fools’ Day, Labor Day, and Columbus Day. Throw in Easter, St. Patrick’s Day, and Fourth of July, and you can see why I installed cabinets in the living room and added more shelves in the hall closet and garage.

I vow to stop, but then I see a trio of flag-waving metal ants in a catalog and lose control. My decorations accumulate in the attic and guest room, multiplying like tribbles on Star Trek. It’s a good thing we don’t have kids because I might toss their blocks and Tonka trucks to make room for fluffy yellow chicks and painted wooden eggs.

I’m telling you, it’s an addiction. I console myself with the fact that decorations purchased on clearance after the holidays are way cheaper than crack and much easier to obtain than illegal prescription drugs. They’re safer, too. But still, sometimes I’m ashamed when I buy red, white, and blue bunting and matching paper plates.

When Michael and I moved here, the neighbors warned us to expect 400 kids on Halloween. I don’t know about you, but I need more than candy with that kind of attendance. First, I dusted off the headless horseman I made out of milk cartons in the sixth grade. (Horace is three feet tall, including the horse, carries a pumpkin head, and wears a white satin cape over his fitted black suit. Clearly, my illness started early.) I bought Michael a pumpkin carving kit and convinced him that real men do indeed use stencils. I pounded a sign in the front lawn that read “Scaredy cats welcome” and draped our bushes and porch with fake spider webs before I installed bats with glowing eyes.

Last year, I bought thirty yards of white tulle and made ghosts to hang from the trees.

Michael, bored after transforming a pumpkin into Frankenstein’s face, hooked up a fog machine and added a witch with a pointed green hat and purple velvet cape.

On November first, we moved on to Veteran’s Day. I packed away the Halloween stuff and pulled out metal flags and tin soldiers reclaimed from Michael’s childhood. A few weeks later, I stuffed them into cabinets and retrieved turkeys, gourds, and scarecrows from an overflowing footlocker. As I sorted through freeze-dried leaves and ears of corn, I thought ahead to Christmas. You need a solid decorating strategy for the mother of all holidays.

In our neighborhood, the sky’s the limit. One neighbor constructs a twelve-foot-tall tumbleweed snowman. One has a working Santa train, and another a laser lightshow. It’s probably dangerous for me to live here, knowing that no one, not even my husband, will rein in the decorating obsession, particularly in December.

Ten years ago, Michael discovered the Department 56 North Pole Village and purchased twelve porcelain buildings in one spree at the local Hallmark store. Since then, he’s accumulated a staggering array of the toaster-sized buildings and their countless accessories. Eventually, he was forced to install a ceiling-mounted shelving system in the garage to house his collection. But the shelves can only hold so much, and now I’m embarrassed to open the door.

Last year, I spent two days setting up an intricate North Pole village on the kitchen buffet while my brother-in-law watched in amazement. Then I moved on to Elfland — an elfin spa complete with coffee shop, bakery, and wedding chapel — plus Santa’s Visitor Center and ice skating rink.

Meanwhile, Michael hung the Christmas lights outside. Don’t get me started on those. We’ve got white, colored, rope, net, and icicle lights. There are so many I’m sure you can see our home lit up from outer space.

As we decorated the tree, my brother-in-law said, “You two are a little obsessed with the holidays, aren’t you?”

I was unwrapping a glass roadrunner that Michael and I had bought while on vacation in Arizona. I dropped the crumpled tissue paper and admired, as I did every year, the yellow sprinting feet. He had to repeat himself to get my attention.

I hung the ornament and stammered, “Another village, and we’ll cross the line.”

He looked at me incredulously. “Cynthia, it was out of control the minute you unpacked Santa’s Woodworks and the lumberjack elves.”

I knew he was right, so I didn’t tell him I’d only completed the early December decorations. By Christmas, we’d have stockings, lighted garlands, and red lacquered pots brimming with poinsettias and cyclamen. Santas of every shape and size would be scattered throughout the house, along with an assortment of angels inherited from my grandmother. Upstairs, on the desk in the hallway, I’d assemble the North Pole ski resort using the latest of Michael’s Department 56 collectibles.

I lay in bed that night and thought, “It’s a sickness. It needs to stop.”

I tried. I really tried.

Two weeks later, I bought a life-size felt snowman for the front porch and a pair of jeweled pewter trees to use as part of the dining room centerpiece. When I dragged the boxes through the door, Michael didn’t ask why. He knows as well as I do that holidays were meant for kids. While we wait for our children to arrive, we decorate.