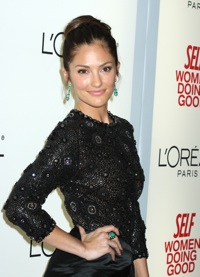 It’s not enough for Minka Kelly to snag New York’s most eligible bachelor, Derek Jeter. She has to go be all gorgeous and nab the title of Esquire‘s 2010 Sexiest Woman Alive, too.

Kelly, who has starred on hit shows Friday Night Lights and Parenthood, told Esquire that turning 30 has been liberating and she learned all her sexy moves from her stripper mother.

“Done with the twenties,” Minka told Esquire. “I’m confident — confident in my skin, and I’m cool with my flaws and all that stuff. It just feels nice to be at peace with yourself. I think my thirtieth birthday gave me permission to have all that. The twenties were a pain in the ass — figuring it all out. What am I doing? Where do I go?”

Minka’s biggest joy as a kid was when her stripper mother would wake her up in the dead of night with a fist full of sweaty singles to go grocery shopping.

“She — for most of my life, she was a dancer,” Minka said. “An exotic dancer. She was a stripper. Um, so she would come home at like three, four o’clock in the morning, and sometimes she would have a really great night, and so she would wake me up in the middle of the night and we’d go to Ralphs and go grocery shopping. And that was so much fun. We’d have the whole grocery store to ourselves, and we would have a blast and buy a hundred dollars in groceries. And it was just the best day ever. The best day.”

Hey, some kids like to play in the park with their soccer moms, some like to shop in the dark with their stripper moms. Her mother’s unusual choice of parenting methods hasn’t seemed to have held Minka back from any success in life.