Conviction arrives in theaters October 15 and is the true story of Betty Anne Waters (Hilary Swank) and her struggle to win her brother’s freedom. Waters’ brother Kenny was wrongly accused of a crime and instead of being sidelined by her brother’s guilty verdict and his decades-long sentence, she took it upon herself to deal with the situation by going to law school.

We are proud to present an exclusive clip from Conviction starring Hilary Swank and Minnie Driver to give readers a mere taste of the greatness that is Conviction. 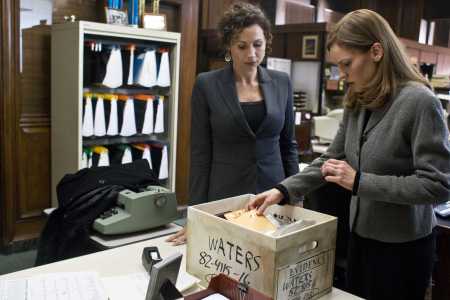 The Waters story is being brought to the big screen by director (and actor) Tony Goldwyn and an all-star cast including Swank, Sam Rockwell, Driver, Melissa Leo, Peter Gallagher and Juliette Lewis.

In 1983, Kenny (Sam Rockwell) was arrested for murder and sentenced to life in prison. His sister Betty Anne (Swank), then a Massachusetts housewife, dedicated her life to overturning his conviction by any means necessary. After finding closed doors everywhere she turned, Betty Anne took matters into her own hands, attended law school and made it her personal mission to free Kenny.

Law school in itself would be an iconic effort alone, but Betty Anne had to first finish high school! After securing her GED, making her way through college and then law school, only then could Swank’s character mount a defense that would eventually change her brother’s guilty verdict to innocent. Meanwhile, Betty Anne had to support her family and all the responsibilities that come with being a modern housewife.

Betty Anne’s Conviction story is an inspirational tale of the highest order. Conviction also plays to the uniquely American virtue of taking an effort upon oneself when all other avenues appear closed. Never accepting no as an answer, Betty Anne not only secured her brother’s freedom, but inspired thousands in the process. 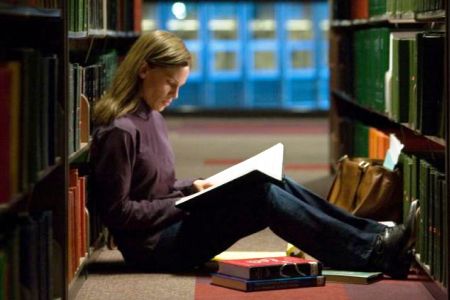 Conviction premiered at the Toronto Film Festival and has generated serious Oscar buzz ever since. Swank, already a two-time Oscar winner for Boys Don’t Cry and Million Dollar Baby, is primed for another Oscar nomination for her inspiring portrayal of the inspirational Betty Anne Waters. Also earning raves is the directorial effort by Tony Goldwyn.

Goldwyn, best known for his acting performances in Ghost and as the voice in Disney’s Tarzan, effortlessly moves to the director’s chair for the telling of the story that is sure to be considered one of 2010’s finest films.