The Hangover cast is back together filming The Hangover 2 in Los Angeles, California. Check out the first photos right here on SheKnows! Plus, Hangover director Todd Phillips hints at what to expect in his highly anticipated sequel. 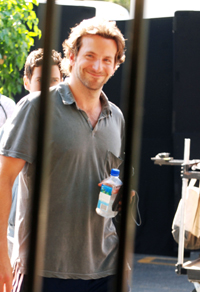 Bradley Cooper, Zach Galifianakis and Ed Helms were spotted on set in Los Angeles filming scenes for The Hangover 2. The sequel has the guys move from Las Vegas to Bangkok, Thailand, where director Todd Phillips hints at what is to come:

“It takes place in Bangkok and LA,” Phillips said. “There’s gonna be some (expletive) surprises.”

The hangover gang is back!

In addition to Cooper, Galifianakis and Helms, Phillips says that another Hangover favorite will be returning, “Mr. Chow’s back, too.”

Mr. Chow, the purse-carrying gangster played by Ken Jeong, definitely stole the show in The Hangover. No word if Mike Tyson (or his tiger) will be making an appearance. 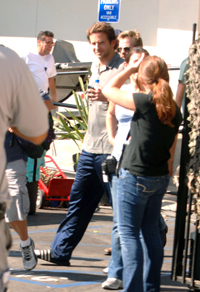 Is Phillips feeling the pressure of making the sequel to his $277 million hit movie?

“I’m not delusional. I know what I’m up against,” he says. “I saw Meet the Fockers. But we’re aiming high. It’s called The Hangover Part Two, you know.”

read on for more Hangover cast