Have you ever wondered what it would be like to have Justin Bieber at your fingertips? Don’t wonder any longer. Just buy his new nail polish line. 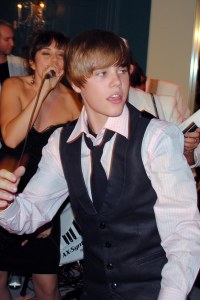 I was starting to get worried when I didn’t have any Justin Bieber news to report last week, but now I feel better. Turns out Justin Bieber is back in the news with a new nail polish line.

The 16-year-old singer with the power to create a frenzy is reportedly teaming up with Nicole for OPI to start a line of fingernail polishes.

The inspiration? According to AOL’s Style List, his songs.

The collection, One Less Lonely Girl, will reportedly splash onto the scene in December with six Bieber-inspired shades including Give Me The First Dance (silver), Prized Possession Purple (grape) and Me and Blue (dark blue). Eight more shades will hit the shelves in January.

What, no Bieber Fever in the color of red? Hey, I’m claiming that one. Check out Justin Bieber’s new line exclusively at Wal-Mart.